Trump is right: US elections are not fair

Ever since it became clear that he was unlikely to emerge victorious in the US presidential election on November 8th, the - do I have to introduce him? - Republican top candidate Donald Trump tries at every inappropriate opportunity to sow doubts about the legitimacy of the upcoming election process. Is he right? Are the presidential elections rigged to his disadvantage? The answer is simple: no. But he is still right on one point: the elections will not be fair - at least from the point of view of the principle that every vote should have the same weight. But first, as I have already tried to explain here, this has been wanted since the founding of the United States - and second, this “vote manipulation” is something that Trump will tend to benefit from.

There are a couple of things you need to understand: First, voters don't decide who will move into the White House in January 2017 - they just decide who will delegate to the Electoral College in each individual state, which will then vote on it on December 19 who can succeed Barack Obama. And secondly, this electoral college is not made up proportionally to the population of the respective states - as one should expect according to the principle of one person, one vote (for example: every vote counts equally): Votes in low-population states such as Alaska or Montana are significantly heavier than Votes in the population centers of New York or California.

Wyoming, for example, currently has a total of 223,065 eligible voters (= eligible voters who registered as eligible to vote); in California, at the last count, 18,251,826 people are on the electoral roll. But Wyoming will send three electoral representatives to Electoral College - one for every 74,355 residents. California sends 55 people to the electoral college, a good 18 times as many as Wyoming, but has almost 82 times as many residents; the other way around: a vote in Wyoming has about four and a half times the weight of a vote in California. And if we look at which states are mainly in the republican (red) or in the democratic camp (blue), it is noticeable that these small states, in which votes are disproportionately heavy, prefer to vote republican (here the results of the presidential election of 2012): 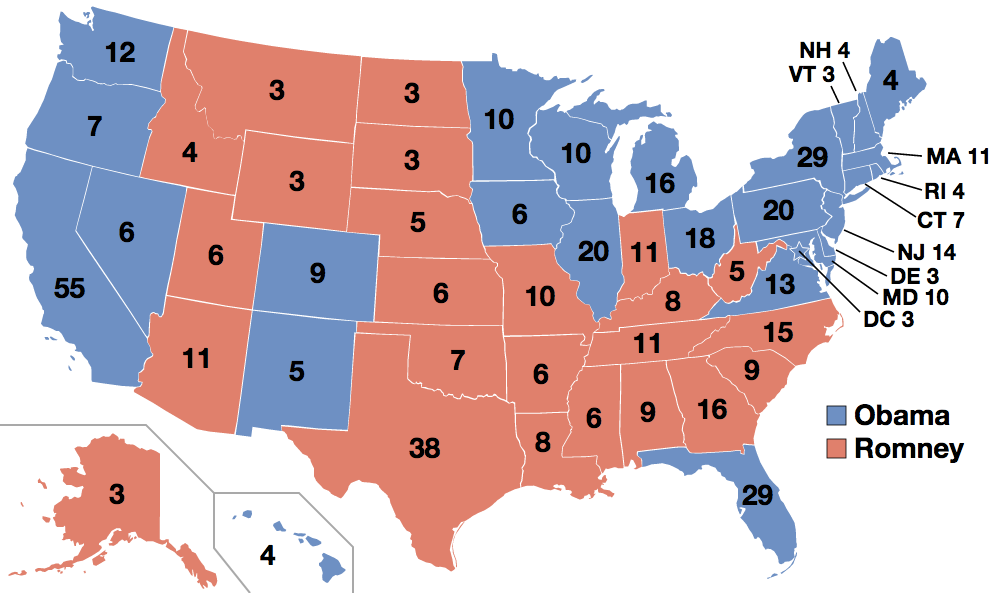 The reason for this inequality of votes is that the size of the state delegations is determined by their representation in both houses of the US Congress; and while representation in the House of Representatives depends on the number of residents in the state (Wyoming has one seat in the House of Representatives), every state has two seats in the Senate - regardless of its size. This “misrepresentation” of the sparsely populated regions was one of the concessions that the large coastal states had to make when the USA was founded, because otherwise the smaller states, out of (not unjustified) fear of being permanently outvoted in all federal matters, according to all wisdom Refused to join the Union.

Another trick, how the weight of individual votes is manipulated, is the so-called gerrymandering, i.e. the redefinition of electoral districts typically operated by the respective regional majority party, which is intended to give their side an advantage. In principle it could look like this: 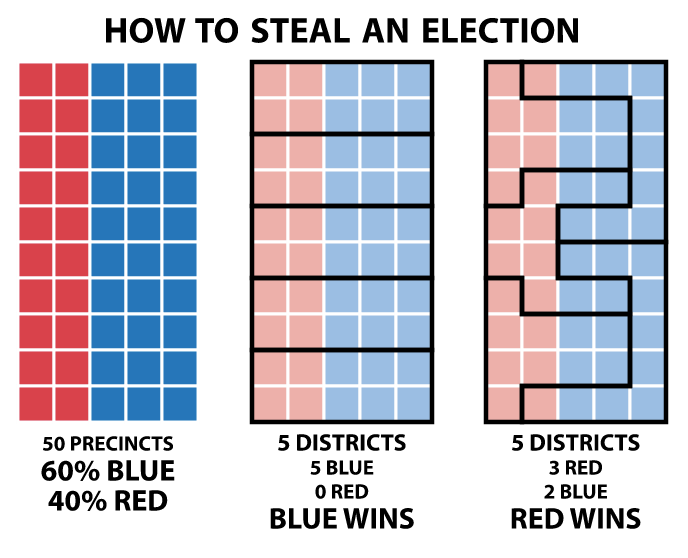 As the graphic shows, by skillfully drawing the electoral district boundaries - even if it may appear very irregular - one or the other party can achieve a result that has nothing to do with the actual preference of the voters. And this is not just a theoretical problem: gerrymandering is one of the favorite pastimes of US politics; With this trick, for example, Republicans from North Carolina were able to win nine of the total of 13 congressional seats, even though 51 percent of the vote went to the Democrats. But of course it's not just Republicans who practice this sport ...

So if someone realizes that not every voter in the US has the same chance to cast his or her vote, then that is absolutely and unreservedly true (apart from systematic attempts to prevent minorities from voting); however, this has always been the case. And as I said, it is certainly not to the detriment of the Trump candidate. That harms itself the most ...