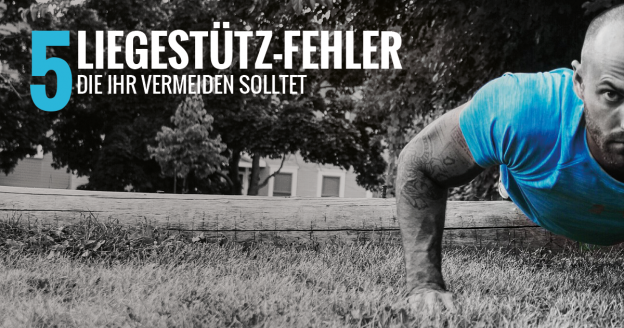 Everyone knows them, most of you have done them before and many appreciate their versatile effects on the body - push-ups or push-ups. As one of the most original and fundamental exercises in fitness, they appear sooner or later on every training plan and can be performed almost anywhere in their numerous variations.

In this article we will show you 5 typical mistakes that you should avoid when training with classic push-ups in order to get the most out of your workout.

The benefits and advantages of push-up training come in many forms. For example:

An essential aspect in order to benefit from regular push-up training in the long term is the technically correct execution of the exercises. You should avoid the following mistakes:

Push-up mistake no. 1: "Razor blade" posture instead of baking cake

One or the other of you will remember: tough classmates who stretched their elbows and shoulders vertically to simulate a non-existent broad cross. Some people jokingly suspected razor-sharp razor blades under the arms of such contemporaries, so that they could or had to put themselves permanently in this potency-bristling posture.

What was the opposite of cool back then is even unhealthy with push-ups: the “razor blade” position. For you, this means that your elbows should not be at a large angle, but slightly stretched. Almost like in the past with baking and baking cakes, when you've applauded your counterpart. Specifically: In the standard position, your upper arms should be at your sides in a position about 45 degrees to your body. Your hands are a little more than shoulder width apart.

Failure to do full repetitions is one of the most common mistakes in a push-up workout and is often the result of improper implementation. 100 push-ups are done quickly if you start to change direction halfway up. Looking good let alone being effective does the whole thing less. So with each repetition, make an effort to stretch your arms upwards.

Push-up mistake # 3: You are not loyal to the line The ideal posture for push-ups: head, buttocks and feet form a line

With the standard push-ups, the head, buttocks and feet form a line. So your whole body should move up and down. You often see people whose upper body is in opposition to the lower body, so to speak, and has long been on the floor, even though the buttocks and legs are still in training.

This happens especially when overexertion and the resulting loss of strength and concentration. Try to keep your back, stomach, buttocks and legs tense throughout the exercise to make your body a solid unit. Unlike the coati, your prongs (during push-ups) have no place on the ground

If you regularly touch the floor with your head or nose during your push-up workout, we recommend that you only train on a foam mattress in the future if you want to avoid headaches and broken noses. Alternatively, you can just hold your head back a little and follow the other instructions in this text ...

You can do push-ups in a variety of ways. But not every one is immediately implementable for everyone. The classic push-ups can bring the beginner to the limits of his strength after just a few repetitions, so that the further explanations become unclean. Here, too, the motto is: Practice makes perfect.

In such cases, try simpler options such as knee push-ups. Supported on the knees, the knees, bottom, back and head form a line, the arms are relieved. Get in shape step by step to make faster progress. It is better to get simpler variations right than repeatedly get more sophisticated ones wrong.

In the next week we will show you effective push-ups with which you can train specific muscle groups. Be curious!