Why do people use the internet 1

In 2011, the number of active internet users worldwide rose to 2.1 billion. This corresponds to 30 percent of the world's population, as a study by the website monitoring service Pingdom shows. At the end of 2000, only 360 million people had regularly accessed the Internet.

Asia has a share of 44 percent with 922 million users. In second place after continents is Europe with 476 million and North America with 271 million. China is the world's leading internet nation. It makes up more than half of Asia's Internet users: 485 million people or 36 percent of the population there use the World Wide Web.

Using data from outside sources, Pingdom also determined that there were 3.1 billion email accounts worldwide in 2011. With a market share of 27 percent, Microsoft Outlook was the most popular email client. Hotmail took first place among email services with 360 million users. 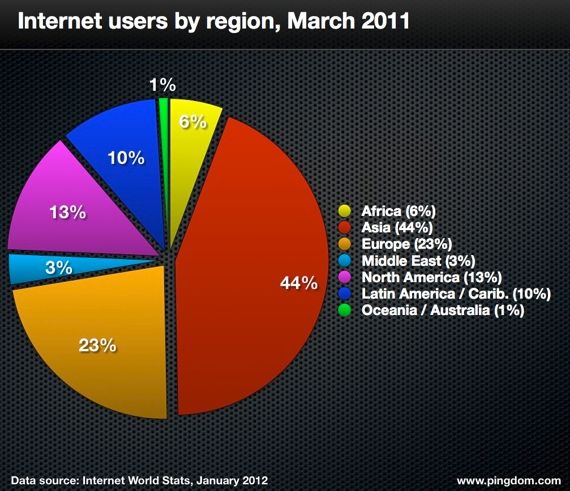 Most internet users (44 percent) are in Asia (Image: Pingdom).

The number of websites worldwide increased to 555 million in December 2011. Last year alone, 300 million websites were added. In addition, in the third quarter of 2011, 220 million new domains were registered. 95.5 million of them had a ".com" address.

According to Pingdom, Facebook increased its membership in 2011 by 200 million to more than 800 million. The number of Twitter accounts rose to 225 million. In 2011 there were 2.4 billion users of social networks.

The study also includes figures on cell phone usage. In 2011, 5.9 billion people had a mobile phone contract and 1.2 billion customers had mobile Internet access. The proportion of cell phones that came with a browser was 85 percent.

"For 2012 we have every reason to believe that the Internet will continue to grow in all areas," writes Pingdom in a blog entry. “As we put more of our personal and professional lives online, we will depend on the Internet in more ways than we could previously imagine. The internet, with all its advantages and disadvantages, is now an important part of almost everything we do. "