The risk of suicide is increasing in India because of the economic and social impact. But there is a lack of awareness of mental health problems. 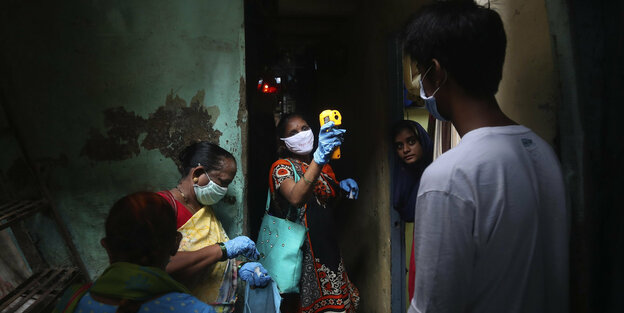 Mumbai: The health service measures a fever, but does not take care of mental illnesses Photo: Rafiq Maqbool / ap / dpa

MUMBAItaz | In the Indian economic metropolis of Mumbai (Bombay), the notoriously overcrowded S-Bahn continues to run only to a limited extent due to coronba. Nevertheless, the railway company registered every 10th death on the rails between January and July as a suicide. In the same period last year, only every 25th case was considered a suicide.

Reports from other regions of India as well as the study "Covid-19 Blues" confirm that the pandemic leads to severe psychological stress and an increase in the risk of suicide.

No wonder: According to the Center for Monitoring Indian Economy, 122 million Indians lost their jobs in April. Only a little more than half of them have been able to take up employment again since then.

The desire and pressure to rise and be socially accepted is great in India. Even before the corona crisis, every seventh Indian suffered from a mental illness.

With the pandemic, the pressure is growing

"Due to the pandemic, people are now exposed to additional great stress," says the Mumbai psychiatrist Harish Shetty of the taz. Economic and social fears would increase, as would stress or worries about sick relatives. In addition, there is mourning for Covid 19 victims.

The media also report of police officers, doctors and politicians who took their own lives after a positive corona test. Shetty sees this as similar to the HIV outbreak in India in the late 1980s. “People ended their lives out of shock,” explains the 62-year-old psychiatrist.

That is why education is so important. The diagnosis of serious illnesses should be conveyed with counseling. People who have hardly left their homes since the lockdown at the end of March and who feel strongly isolated are particularly stressed. Social activities were severely restricted, with many shops and industries closed for months.

One of the toughest lockdowns

India had one of the longest and toughest lockdowns in the world to stop the spread of the coronavirus. Ultimately, however, the infections increased. Since July, public life and the economy have gradually been reopened.

There are now more than 4.3 million registered corona cases, the second highest number in the world. Almost 900,000 are currently considered active. Almost 74,000 people have died related to the virus in India.

At the same time, corona fatigue is spreading. Masks hang under the chin, spacing rules are forgotten. Lung disease dominated the media for months. But stopping reporting on the effects of the pandemic doesn't help, says Shetty.

“The media are important allies in educating people about mental health. But that is still a taboo in India. ”But it should be addressed how people can be helped with depression.

Opposition politician Rahul Gandhi sharply criticizes Prime Minister Narendra Modi for neglecting the consequences of the crisis. "The prime minister is very optimistic," says Shetty. He embodies a father figure, but the confidence he displayed has hardly carried over to the population.

"The government has provided a lot of food aid, but the mood of the people must also be improved." The issue of mental health is neglected by politicians.

If you have sad thoughts of your own, or maybe even think of suicide, try talking about them to others. They can be friends or relatives. But there are also a large number of offers of help that you can contact.

“We don't have a suicide prevention program,” complains Shetty. "If state-trained health workers can recognize malaria or dengue and treat minor cases, why can't they ask about mental health as well?"

Shetty herself has been training so-called Mental Health Soldiers, a kind of barefoot psychiatrist, for ten years. These mostly female people can identify signs of depression and refer them to professionals. It is often enough that those affected have someone who listens to them, which is also possible via mobile phone or online.

With the current economic decline of 24 percent compared to the previous year, the population is going through hard times. But Shetty remains optimistic and hopes India will recognize its mental health problem in the wake of the pandemic.