Are Muslims discriminated against in America?

Muslims in US Army: Loyal and Discriminated

When he joined the Marines in October 2000, Mansoor Shams never dreamed that one day he would have to prove his love for his country. Shams, a practicing Muslim, came to the United States from Pakistan when he was six. He went to the military in order to build an independent life, but also because he felt an obligation to his adopted home, the USA.

"In my belief you have to be loyal to the country you live in," he told DW. "That Muslims would not stand by their country - as it is sometimes portrayed in the West - that thought has never occurred to me."

But one day in September 2001 changed everything. Since the 9/11 attacks, Muslims have been under constant pressure to prove their patriotism, says Shams - and that applies even to those in uniform.

After the 9/11 attacks, he was met with increasing suspicion, says Shams, who was a Marine in North Carolina for four years. Before that, hardly anyone cared that he was a Muslim, but after 9/11 people looked at him with different eyes, said Shams. "I have experienced Islamophobia firsthand," he says. "And then it wasn't as bad as it is today."

Republican presidential candidate Donald Trump is currently fueling suspicion with his anti-Islamic rhetoric. The high point so far came last weekend when Trump criticized the appearance of Khizr and Ghazala Khan at the Democratic party conference. The son of the Khan, a captain in the US Army, died in 2004 while on duty in Iraq. 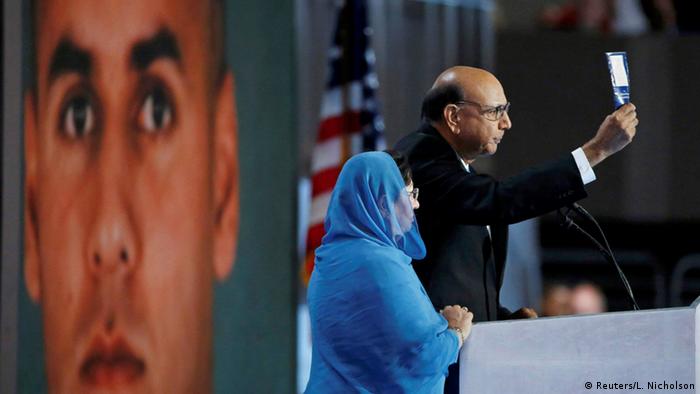 Khizr Khan and his wife at the Democratic Party Conference

Both Democrats and Republicans were appalled by Trump's behavior. And for American Muslims like Shams, the incident was further evidence of the growing hostility towards Muslims in society. "Enough is not being said about the sacrifices Muslims make for the United States," says Shams. This also includes the long history of Muslims in the US military.

According to historical reports, Muslims played an important role in the American military during and before World War I. But since September 11th, the army, navy and air force have had a hard time recruiting members of the faith. Of the currently 2.2 million active military and reservists, only 5896 describe themselves as Muslim. This was the result of research by the American television broadcaster ABC in December 2015.

The language skills and cultural competence of these people would be of great use to the US Army, which has long been active in the Middle East. One finally saw that in the military as well. Since 2003, the "09 Lima" program has been recruiting translators and interpreters whose mother tongue is, for example, Arabic, Pashto or Farsi.

Muslim military personnel in the US still have to defend themselves against suspicions and accusations. In 2009, Nidal Hasan, a psychologist with the US Army, shot dead 13 people and injured 30 others in a rampage at Fort Hood military base in Texas. Many members of the US Muslim community felt pressured to publicly condemn Hasan's act.

Shams was impressed that Khizr Khan, the father of the fallen soldier, spoke out publicly against Trump in front of the whole country. Trump's answer that he ultimately made sacrifices by building hotels and employing a lot of people is repulsive to Shams. That cannot be compared to the loss of a son who gave his life for his country.

Other Muslims in the US take a similar view. In response to Trump's testimony, they shared photos of Muslim military personnel on social networks. A Muslim user tweeted a photo of the late son of the Khan with the words "Hey Donald Trump, this is what a real American hero looks like".

To inform the public about how Muslims are doing in the United States, Shams created the website MuslimMarine.org. He hopes to be able to spread such a positive image of his religion that is very different from the one that Trump paints. America has to learn that not every man with brown skin or black hair is a terrorist, "says Shams." For example, he could be a soldier who risks his life for your country.