Can the nature of time be destroyed

Peat is in demand: it is sold in huge quantities throughout Europe for industrial vegetable growing. The origin of the peat are mainly bogs in the Baltic States, which are being destroyed more and more by its degradation - with serious effects on climate change. 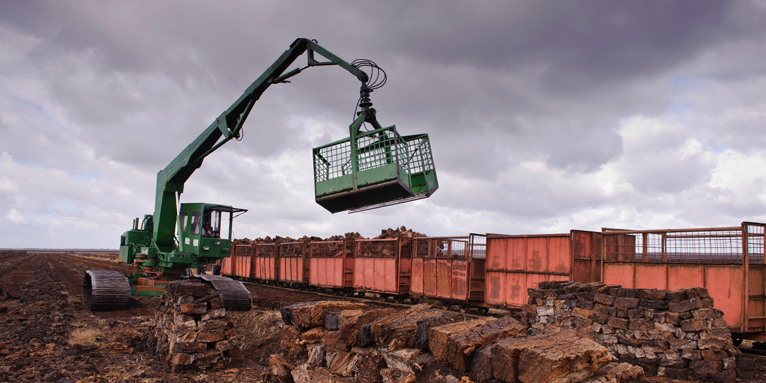 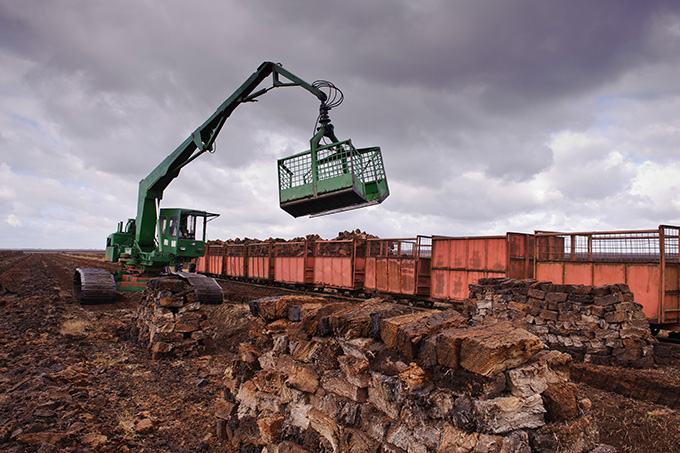 In the delta of the Memel in front of the Curonian Lagoon in Lithuania lies one of the most famous raised bogs in Europe: Aukstumala. The contrast between the beauty of the moors and their industrial destruction by peat extraction is so striking in this area, because the two are very close to one another here. While in Germany today peat is only mined industrially in a few regions of northwest Germany and the sector is visibly on the decline in Poland, the production volume in the Baltic States is even increasing. The reason for this is simple: peat has substrate properties which, with increasing demand, are considered indispensable, especially in industrial vegetable cultivation, and it is cheap - also because the price does not include either the carbon footprint or the cost of restoring the peeled areas.

A total of almost 2.5 million tons of peat are distributed across Europe every year from the Baltic States. “Our consumer behavior also makes a significant contribution to this,” says Nerijus Zableckis. He works for the Lithuanian Nature Conservation Fund and coordinates the Lithuanian project team of "LIFE Peat Restore", which NABU started in 2016 together with eight partner organizations from Poland and the Baltic States. Zableckis believes that criticism of the peat industry should not be hypocritical and ignore consumer behavior. "Baltic peat is in production in almost every Spanish greenhouse tomato and in 99 percent of all heads of lettuce eaten in the EU."

In particular, so-called white peat, i.e. the peat formed by peat moss, is very popular in horticulture. It has a very favorable nutrient ratio for plant growth, an advantageous consistency for the application, is germ-free and homogeneous. Compost or other substitute substrates cannot keep up when it comes to sterility, which is why peat is also used in organic vegetable growing in order to be able to do without chemical pesticides.

A total of four project areas in all of Lithuania are to be renatured in the coming years by “LIFE Peat Restore”, including a former peat area near Aukstumala. In order not to release the peat industry from its responsibility for the renaturation, Nerijus was able to win the branch association of Lithuanian peat producers as a project partner. So far, it has hardly been possible to restore peatlands to their fully functional state after potting. Often the peat-forming vegetation does not regenerate on its own and has to be transplanted.

In the long term, however, there must also be fair market prices for peat, i.e. including the environmental costs of peat extraction. "Then peat will no longer be the cheap, easily available raw material that you still encounter today as garden soil in some hardware stores," says Letícia Jurema, project manager of "LIFE Peat Restore" in the NABU federal office. "We have to reduce consumption and the associated greenhouse gas emissions effectively and drastically."

Peat extraction was once widespread in Germany too. In the past, peat was primarily used as fuel, but today's peat industry serves horticulture with growing media that consist of 90 percent peat. 95 percent of the German peat extraction areas are in Lower Saxony. Around 6.5 million cubic meters of peat are extracted here every year. However, the demand for horticulture in Germany alone is around 9 million cubic meters. That is why peat is also imported from the Baltic States. The Baltic countries reached their peak of peat extraction during the era of the Soviet Union in the middle of the 20th century. With the accession of Estonia, Latvia and Lithuania to the European Union, many moors could be secured as Natura 2000 protected areas. However, many of the peat mining rights remained untouched despite the designation of protected areas. The increasing demand for Baltic peat in Europe leads to an increased risk for the still intact moors. For example, the German company Klasmann-Deilmann has already significantly intensified its production in Lithuania and Latvia in recent years. Last year alone, the industry giant produced 3.5 million cubic meters of growing media - obtained from 2.9 million cubic meters of peat.

Innovative renaturation techniques are in demand

The vegetation in the peat patches usually does not regenerate itself. Ingenuity - like floating islands here - is in demand. - Photo: Przyrodników Club

The long-term problems caused by peat extraction can also be seen a few hundred kilometers further southwest of Aukstumala, near the Polish city of Gdansk. Marek Sobocki could actually be satisfied. The director of the Slowinski National Park counts 350,000 visitors annually. However, he is worried about the former peat areas in the picturesque coastal national park. Peat mining has been history here for almost 40 years, and a lot has already been invested in restoring the natural hydrological regime. Due to its bank structure and size, however, the vegetation in the peat cuttings does not regenerate by itself. The impact of the waves in particular destroys any independent attempt at settling peat mosses.

Together with the Polish project partner from Klub Przyrodników, the idea arose to install floating islands with peat-forming vegetation as breakwaters. Repopulation can take place from the islands and in their slipstream.

In November, the UN climate conference will again be the focus of reporting. An essential question is how to properly deal with natural carbon sinks. In contrast to the burning of fossil fuels, incorrectly treated ecosystems such as moors usually emit invisibly. So far they have only been taken into account on the voluntary certificate market in the Framework Convention on Climate Change. This enables the voluntary financing of moor protection measures. More important, however, would be binding targets and instruments on how these emissions can be reduced. According to the Paris Climate Agreement, the signatory states are to draw up binding inventories of all emissions resulting from land use by 2020.

NABU and its partners in the “LIFE Peat Restore” project want to prove that it is possible to a certain extent to restore even heavily damaged peatlands from Germany to Estonia for climate protection. Destruction makes peatlands a driver of climate change, and they are always part of the solution. 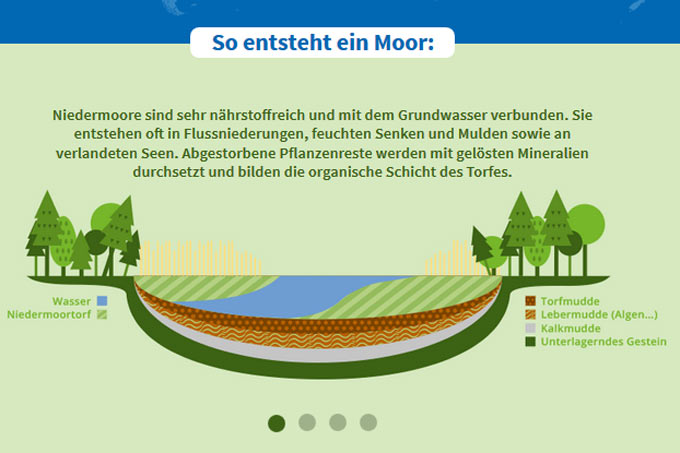 The value of the moors

What are peatlands good for and why is it so important to protect them? Discover the value of the moors in our animated infographic! 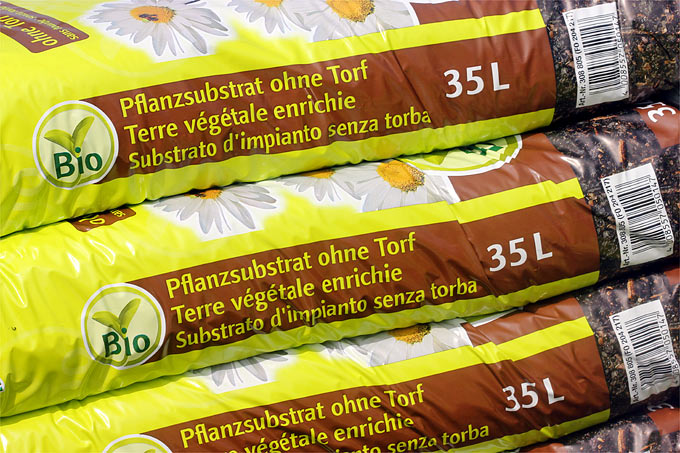 What can I do?

There are different ways to advocate for more moor protection. We already have an influence through decisions when shopping. 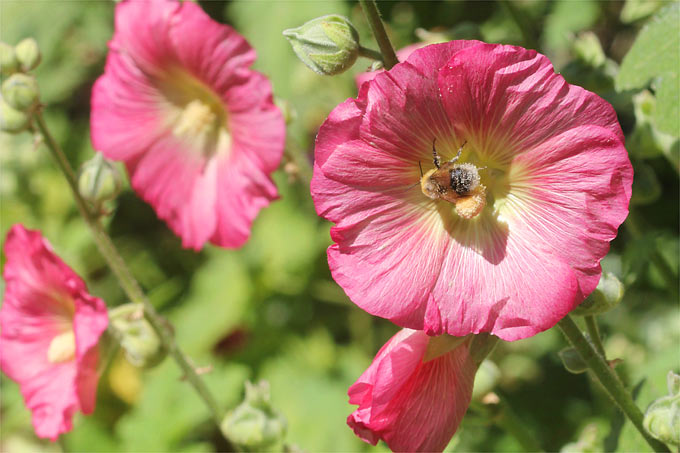 Peat mining destroys habitats for plants and animals and releases greenhouse gases. We therefore do not use peat in the bed - you can join in too!