Quiz solved? So far it has been debated whether or not dark matter can interact with itself. Now a new model could explain the conflicting data. According to this, the particles of dark matter can only collide if they have a certain speed and thus energy. Only then will there be a resonance that enables their interaction. If this is confirmed, this would also be an important indication of the mass of the still unidentified particles.

Although dark matter makes up more than 80 percent of all matter in the universe, its nature is still a mystery. It seems clear that it influences the behavior of celestial bodies and galaxies through gravity. But we neither know which particles dark matter consists of, nor whether these particles can interact with one another - for example by colliding or annihilating themselves. So far there are indications for this, but also against it.

And something else is strange: According to the models, dark matter should form particularly dense clumps in the center of galaxies. But that is not always the case: "Many dwarf galaxies and some faint spiral galaxies have a lower dark matter density in the center than expected," explain Xiaoyong Chu from the Austrian Academy of Sciences in Vienna and his colleagues. 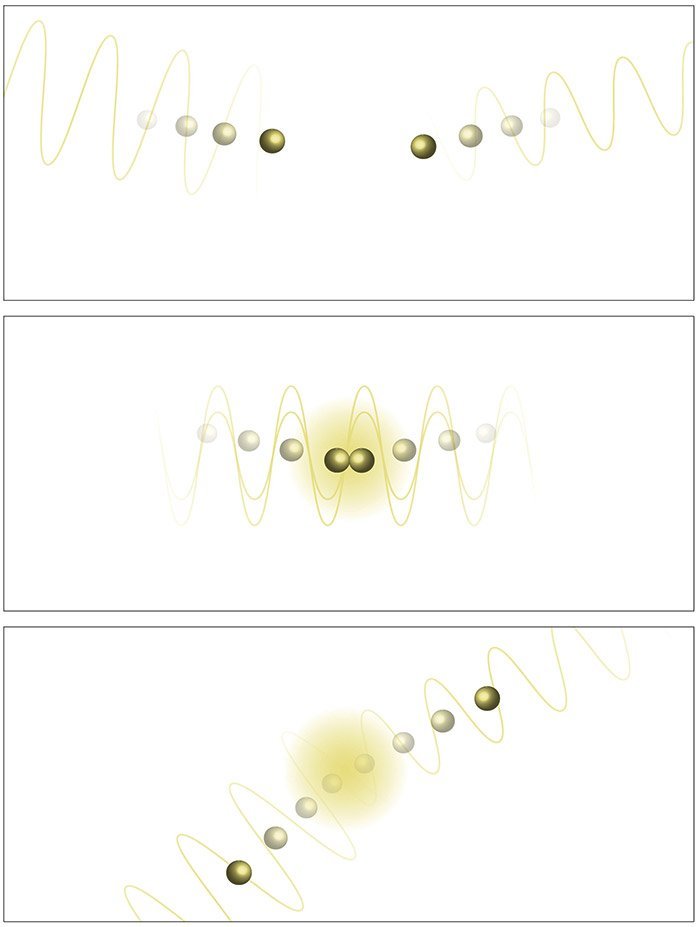 Dark matter particles usually pass each other without interacting. But with a certain energy there is a resonance and they can scatter on each other. © Kavli IPMU

Theoretically, collisions between dark matter particles could explain this discrepancy: When they collide, they bounce off and are thrown away, or they are even extinguished. The theory goes that this would thin out the lump of dark matter in the center of the galaxy. The problem with this is that it would have to happen in all galaxy nuclei - and not just in the dwarf galaxies and spirals that deviate from the model.

Collision only with resonance?

Now, however, Chu and his team may have solved this dilemma. Because they have now developed a model that explains why the particles of dark matter sometimes interact and collide, sometimes not. According to this, collisions of these particles are only possible if they collide with a very specific, rather low speed. Because only then will there be a resonance that allows their interaction.

The highlight: In dwarf galaxies, dark matter moves rather slowly and can therefore scatter on each other, as Chu explains. “On the other hand, that doesn't happen in galaxy clusters, where they move quickly. They have to meet a resonance for a collision to occur, ”says the researcher. He compares this phenomenon to the resonance of a guitar string, which only resonates with a tuning fork if it is correctly tuned.

SIMPs would go well with the model

“At first we were a little skeptical whether this idea would explain the data from observations,” reports co-author Camilo Garcia Cely from the German Electron Synchrotron DESY. “But when we tried it, it worked fantastic.” As the researchers found, this resonant scattering of dark matter can explain its mass deficit in all astrophysical scales. According to their model, the resonance occurs when the energy of the particles is close to twice their mass.

This theory could also allow conclusions to be drawn about the still unknown mass of dark matter particles: As the researchers found, the SIMPs - Strongly interacting Massive Particles - previously postulated by some physicists, would fit well into the picture. These particles, consisting of a quark and an antiquark, should be smaller and lighter than the previously favored WIMPs (Weakly Interacting Massive Particles) and, unlike these, interact with one another via gravity.

“As far as we know, our model is the simplest explanation for the puzzle. It could help us a lot in understanding what dark matter is, ”says co-author Hitoshi Murayama of the University of California Berkeley. In the next step, the research team wants to support its theory with further observational data. (Physical Review Letters, 2019; doi: 10.1103 / PhysRevLett.122.071103)

Source: Kavli Institute for the Physics and Mathematics of the Universe, Deutsches Elektronen-Synchrotron DESY