What is the importance of the harmonic analysis

At some point in an open-plan office, the ballasts for the fluorescent lamps began to hum, so that the entire workforce stopped working because the noise made staying in this office a torture.

The reason was the retrofitting of the elevator system, which was supplied with energy from the same distribution as the sub-distribution for the office lighting. The inverters in the elevator system produced harmonic currents, the frequency of which caused the iron in the ballasts in the fluorescent lamps to vibrate.

Figure 1: Schematic representation of the influence of harmonic currents that arise somewhere in the electrical system and can have an effect at a completely different point.

The influence of harmonics can be manifold. In Figure 1, a possible influence was shown as an example. The device 1 could, for example, be the elevator system described above. This "device" produces harmonic currents Ih, which cause a corresponding "harmonic voltage drop" Uh at the network impedance ZS. However, this voltage drop Uh is applied to all electrical equipment that is connected to the same network impedance ZS. In this way, the malfunction spreads throughout the entire system and can cause malfunctions or even destruction somewhere.

Harmonics can cause fires if equipment that reacts safely to the usual mains frequency is overloaded by higher-frequency currents.

This problem has become more acute in recent years because so-called non-linear consumers are used more and more frequently in all electrical systems. The problem therefore arises not only in the industrial sector, but increasingly in the commercial sector (office and administration buildings, commercial buildings, service companies of all kinds, etc.).

Non-linear consumers are consumers that take up a non-sinusoidal current when a sinusoidal voltage is applied. In the past, these were mostly the large frequency converter drives and the like. - today there are more and more common single-phase AC consumers. They cause a hazard that has already caused fire damage in recent years.

Brief theoretical introduction
Every periodic curve shape (1) can be broken down into harmonic oscillations of different frequencies using the so-called Fourier analysis (Fig. 2). This means that every non-sinual curve shape can be broken down into numerous sine curves, which differ from one another in terms of their period duration (T) (2) and the level of their amplitudes. This always results in a so-called "fundamental oscillation" whose period (T1) corresponds to the period of the original non-sinual output oscillation, and the other "harmonics" whose period (Tn) is many times smaller than the fundamental: (3)

(1) Periodic waveforms can be rectangular, semicircular, triangular, trapezoidal, etc. They are all periodic if this form is repeated at regular intervals. The waveform we know best is the "sine wave" of the mains voltage - sine wave waves are also known as "harmonic oscillations".

(2) Period T is the time in which a sinusoidal oscillation starts from zero, reaches a positive and a negative maximum value (amplitude) and then returns to zero. This is then a full oscillation with the two half-waves (positive and negative half-wave). The relationship between this period T and the frequency is: f = 1 / T.

(3) The nth harmonic has an n times shorter period 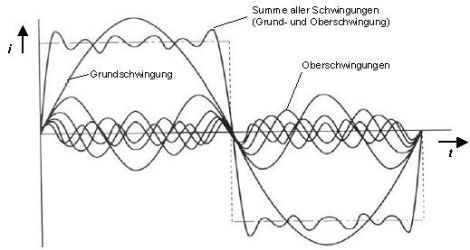 Fig. 2: Decomposition of a so-called square wave: Periodic waveforms can always be broken down into sine waves. The first sinusoidal oscillation is the one whose period T1 is the same as the period of the output waveform - it is called the fundamental oscillation.

For the frequency (f) this means:
f 1 = f and the following also applies:

Special features of the 3rd harmonic
In a three-phase network, with symmetrical loading, it can be assumed that the external conductor currents in the star point “add to zero”, so to speak - the N-conductor current in this case is of course 0 A. This also applies to most “harmonic currents”. The third harmonic with a frequency of 150 Hz (f3 = 3 · 50 Hz), on the other hand, is added arithmetically at the star point. This means that if an equally large 150 Hz current (the 3rd harmonic) occurs in all three outer conductors, a triple 150 Hz current will flow in the N conductor. Sooner or later this inevitably leads to a neutral conductor overload.

The cause of these 150 Hz currents are primarily the modern power supply units. The situation should be illustrated in the following Figure 3 as an example: 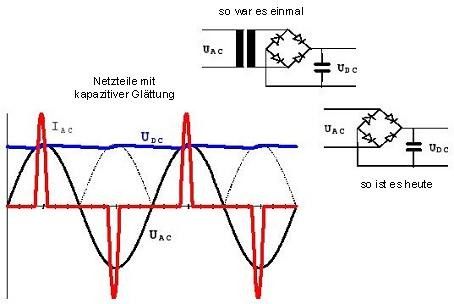 Frequent cause for the 3 harmonics: power supply units without transformer and with capacitive smoothing. To the left of this is the line diagram from which the pulse-shaped current (IAC) that the network has to deliver is shown. Power supply units are often used in equipment that draw their voltage directly from the grid (and not via an upstream transformer). The currents IAC drawn from the network are shown in Figure 3. The result is harmonic currents, which are shown schematically in the following flow diagram (Figure 4):


An analysis of the resulting harmonics shows that the 3rd harmonic in an otherwise symmetrically divided three-phase system can be so large that a total of a current arises in the N (PEN) conductor that is possibly twice as high as that Current in one of the outer conductors.

How to deal with this problem
What should I do if such a problem (for example when checking the electrical system) is detected? This has to be decided on a case-by-case basis. Without interfering with the existing electrical system, one can basically only try to reduce the load.
The power is reduced until a tolerable current flows in the neutral conductor. However, this will hardly be possible in practice. Another possibility would be to increase the conductor cross-section of the corresponding supply line. In both cases, however, this means that the supply line is oversized in relation to the external conductor load.

In any case, the neutral conductor must be protected against overload.

There were two options: 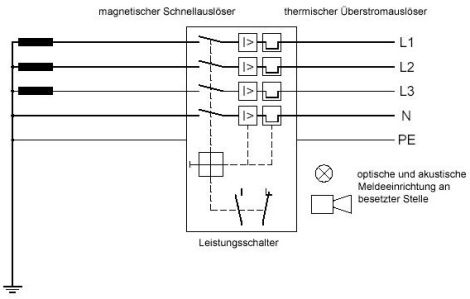 
Annotation:
It is also possible to monitor the N-conductor current using current transformers and, above a certain current level, trigger a switch (for example a circuit breaker) that only disconnects the three outer conductors from the mains.

c) It makes sense to use a signaling device to indicate that the system has been switched off due to overloading of the N conductor.
d) When designing the voltage sources, such as transformers, twice the effective power of the non-linear electrical consumers must be taken into account. In addition, the higher losses caused by other than 3rd harmonic harmonics must also be taken into account when dimensioning.
e) Reducing the N conductor should always be avoided (see next point).
f) When dimensioning the cable cross-sections, twice the effective power of the connected non-linear electrical consumers must be taken into account. PEN or N conductors are to be dimensioned at least for the sum of the currents of the 3rd harmonic in all outer conductors. If it is to be expected that the N conductor load is higher than the outer conductor load due to high harmonic currents, the cross-section of the cable or line must be designed according to the load on the N conductor.

Note 1:
If the PEN (if present) or N conductor is dimensioned for twice the outer conductor cross-section determined above, overloading is usually not to be expected.

Note 2:
However, since the N conductor (or the PEN conductor if present) can be more heavily loaded than the outer conductor when there is a high proportion of harmonic currents in the zero sequence, the cross-sections must be laid that are far too high for the required operating current. Incidentally, this also applies to those exposed to harmonics
External conductors themselves too, since the harmonics are reactive power
to produce. For this reason, it is ultimately only worthwhile to use an appropriate line filter when there is a high level of harmonic load.
g) Compensation capacitors must be choked in order to avoid damaging network resonances. The tone-frequency ripple control signal (TF) must be observed.
h) The capacity of UPS systems can be limited by a crest factor that is too high. The non-linear consumers with three times the active power must therefore be taken into account in their design.

2nd possibility - with relief filter
Another possibility would be to install a series resonance filter for each or a group of harmonic-generating devices, which allows the 50 Hz fundamental wave to pass through and for all other frequencies, i.e. also for other harmonics,
represents a high-resistance impedance.4 In the electronic ballasts of well-known manufacturers in Germany, this already happens at a power of 25 W or 36 W.

In many cases, a central solution, as shown in Figure 6, would be more cost-effective. 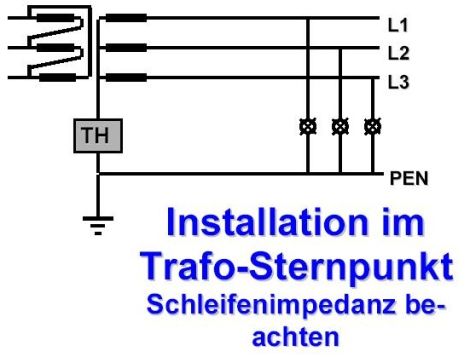 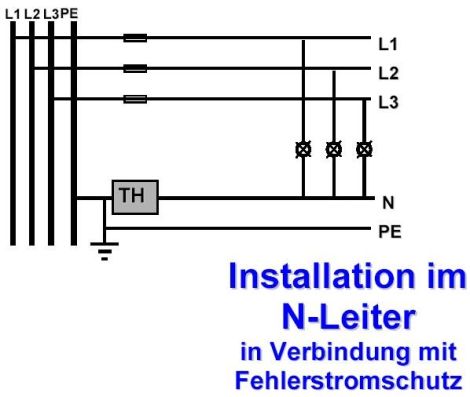 Figure 6: Use of a filter against the 3rd harmonic in a TN system


Note 2:
The latter does not apply in the event that the filter is installed in the star point (Fig. 6 below). However, in this case you should make sure that this increases the loop impedance of the fault loop. Measurements should be carried out to determine whether the necessary switch-off times according to DIN VDE 0100-410 are still being adhered to.

The following method is an aid in determining the harmonic load on the N conductor in a simple manner:
All external conductor and N-conductor currents are measured by means of a clamp-on ammeter, which shows the “real effective value”.

N-conductor current cannot be explained by an asymmetrical load!

Measuring devices that can be used to measure harmonic currents should be available (Fig. 8). Even relatively inexpensive measuring devices for harmonic analysis have standardized interfaces to the PC, so that the measurements can be further processed and documented with commercially available standard software. 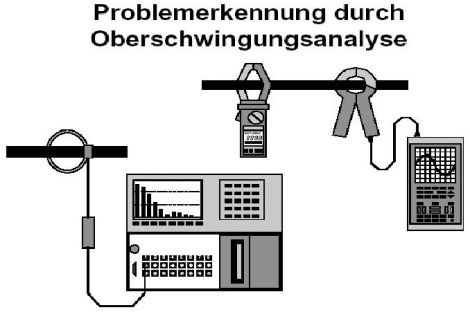 Figure 8: Measurements of the harmonics with corresponding devices

A rethink must take place!
As it hopefully became clear, the world is no longer okay today as long as one pretends in the electrical installation that everything is still the same as it used to be. Anyone who wants to operate high-tech devices and systems cannot pretend when it comes to power distribution that nothing has changed in the last 50 years. The saying of “new wine in old bottles” applies here.

So a rethink has to take place for many. First of all with the operator of the electrical system. If he acts as a client for the construction of an electrical system, he must be prepared to pay a corresponding price for technically correct and modern solutions. One cannot want to buy the fast and modern sports car and, for reasons of cost, fall back on the technology of the first years of automobile history for the chassis.

But also with planners and installers a rethink has to take place. Anyone who plans or erects the way they were used to in the sixties or seventies is acting recklessly.

The General Association of the German Insurance Industry (GDV) or VdS Schadenverhütung in Cologne has recognized this problem and in coordination with the relevant associations (VDE / ABB, ZVEH, VDB, DEMVT i.a.) as well as the manufacturing companies tried to tackle the problem from the bottom up. Qualified training in the field of lightning and surge protection as well as EMC-compliant electrical installation should prepare planners, installers and testers of electrical systems for this task.

This is the only way to raise awareness in the area of ​​EMC; because recognizing a problem is certainly not enough - you also need the tools to face this problem and to master it.