How were riboswitches discovered

"Control panel" of the bacteria deciphered

many bacteria have molecular control elements with which they can switch genes on and off. These riboswitches open up new possibilities for the development of antibiotics or for the detection and reduction of environmental toxins. Researchers at the Karlsruhe Institute of Technology (KIT), the University of Heidelberg and the Free University of Berlin have now fundamentally investigated how the riboswitches work using light-optical microscopy on single molecules.

Riboswitches are located on the messenger ribonucleic acid (mRNA), which transports genetic information to the site of protein synthesis. A riboswitch consists of a sensor that measures the concentration of a small metabolic molecule and an effector that controls gene expression and thus the synthesis of a protein. Because riboswitches are found in many bacterial pathogens, they represent important targets in the development of new antibiotics. They open up further applications in synthetic biology. For example, riboswitches can be used to genetically modify bacteria so that they can detect and break down low molecular weight environmental toxins such as herbicides. A prerequisite, however, is a basic understanding of the processes on which the function of the riboswitches is based. The work presented in the magazine Nature Chemical Biology contributes significantly to this. 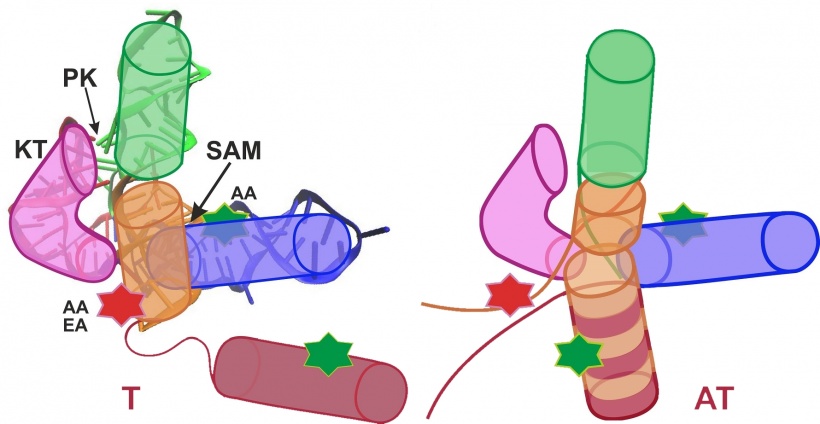 The work funded by the Heidelberg Karlsruhe Research Partnership (HEiKA) was created in cooperation of the research groups around Professor Gerd Ulrich Nienhaus at the Institute for Applied Physics (APH), Institute for Nanotechnology (INT) and Institute for Toxicology and Genetics (ITG) of KIT and at Professor Andres Jäschke at the Institute for Pharmacy and Molecular Biotechnology (IPMB) at Heidelberg University. The focus of the work is the S-adenosyl-L-methionine (SAM) -I riboswitch. "In this riboswitch, the connection of the SAM molecule causes the conformation, that is, the spatial arrangement of the atoms, to change from the antiterminator (AT) structure to the terminator (T) structure," explains Nienhaus. "This switches off gene expression."

First of all, the scientists in Heidelberg synthesized the SAM-I riboswitches and marked them in various places with two different fluorescent dyes. The researchers at KIT then examined these RNA molecules with high spatial and temporal resolution using highly sensitive light microscopes, which recorded the fluorescence emission of individual dye molecules. In Förster resonance energy transfer experiments (FRET), the conformational dynamics could be recorded directly: A green dye is excited to emit light with laser light. If there is a red dye nearby, it can take over the excitation energy of the green dye and emit light itself. The probability that an energy transfer takes place is strongly dependent on the distance between the dyes, so that structural changes in a molecule to which the dyes are specifically attached can be observed directly via the emission of the red dye. Since the light emission is extremely weak, complex data analysis methods based on Hidden Markov Modeling were required. Professor Bettina Keller from the Institute for Chemistry and Biochemistry at the Free University of Berlin developed the method specifically for this type of experiment in order to highlight the time-dependent light emission signals from the noise.

During the analysis, the researchers succeeded in distinguishing not only two conformations (T and AT) of the SAM-I riboswitch, but a total of four (T1, T2, AT1 and AT2). It was also surprising that the riboswitch in the presence and absence of SAM did not, as was actually to be expected, completely switch back and forth between T and AT structures, but instead fluctuated continuously between all states; only their weightings were shifted. A result that was particularly important for biological function was that the structural fluctuations observed were significantly faster with the docked SAM than without SAM. Since the riboswitch sequence on the messenger RNA is directly in front of the gene to be controlled, the RNA molecule must be able to set a T-structure (switch off) as quickly as possible after synthesis - in the presence of SAM - in order to enable the subsequent transcription of the controlling gene. The acceleration of the structural fluctuations through SAM binding ensures that the T-structure can be adjusted quickly enough. “The dynamics of the SAM-I riboswitch therefore play a decisive role in its function,” summarizes Nienhaus from KIT. "We owe these detailed insights into how a biomolecule works to an interdisciplinary research approach with contributions from physics, biotechnology and theoretical chemistry."