Violence in India: Against all reasons of state

Modi fuels hatred of the Muslim minority. The democracy of India and the self-image as a secular state are in danger. 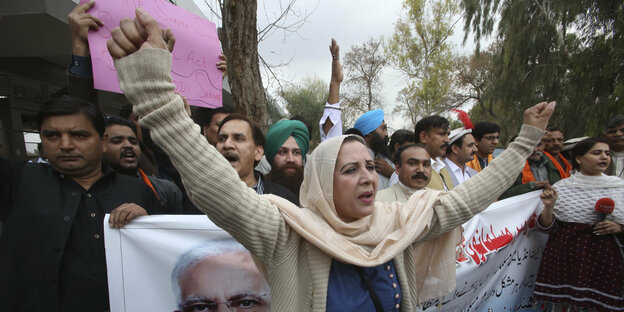 The pictures were terrifying. It has been two weeks since Hindu nationalists ran through the streets with sticks and iron bars in the northeast of the Indian capital New Delhi and chased fellow Muslims. Men were forced to bare their genitals to show if they were circumcised. Cars, houses and shops were set on fire, as was a mosque.

Videos are circulating in which injured men lie on the ground and are forced by police officers to sing the national anthem. At least 45 people died and over 200 people were injured. Most of the victims were Muslims. What began with nationwide protests against the citizenship law passed in December resulted in bloody violence. Prime Minister Narendra Modi and his Hindu nationalist party BJP prepared the ground for the escalation.

The questionable Citizenship Amendment Act (CAA) makes it easier for people from neighboring Pakistan, Bangladesh and Afghanistan to be naturalized, provided they are not Muslims. Modi's new citizenship law is nothing more than state-mandated discrimination. For the first time since India's independence in 1947, citizenship is tied to religion.

This contradicts the Indian constitution and the founding logic of the country, which - also in contrast to Pakistan - has consciously decided in favor of a secular republic despite a Hindu majority. Unity in diversity is a phrase that has been tried again and again for Indian identity. It is this thought that holds the country of 1.3 billion people together in all its contradictions.

It may also be thanks to this self-image that the recruitment attempts of the “Islamic State” in India have largely failed, which is astonishing as India is home to the third largest Muslim community in the world after Indonesia and Pakistan.

The fact that so many people in India and also in the Indian diaspora are protesting so violently against the citizenship law - although it does not affect the rights of Indian citizens at all - is a glimmer of hope in the midst of Modi's Hindu nationalist course. The protesters' anger is also directed against other political steps taken by the Modi government:

With a planned state-wide civil register (NRC), all residents of the state would have to prove their citizenship through documents. If they cannot do that, they would run the risk of becoming stateless. The politics in the hotly contested Kashmir region also illustrate the Hindu nationalist and anti-democratic course of the Modi government. In August 2019, the government withdrew its semi-autonomous status from the state of Jammu and Kashmir.

This status guaranteed the state, which is inhabited by a majority of Muslims, its own constitution and extensive political rights. To stop protests, thousands of people were arrested, mosques were closed, and the Internet and telephone services were blocked for months. Even before he took office in 2014, critics warned based on Modi's story that violence against minorities in the country would increase under his government.

In the 1970s, Modi was a member of the RSS, a paramilitary volunteer organization of Hindu nationalists who strive for a pure Hindu state. Modi's party, the BJP, is still considered the political arm of the RSS to this day. When, in 2002, 59 people died in an arson attack on a train in the state of Gujarat in which many Hindu pilgrims were sitting, Hindu nationalist mobs chased Muslims in the days that followed, incited by RSS officials.

At least 1,000 people, mostly Muslims, were killed. Modi, who was the head of government of Gujarat at the time, was also responsible. Even so, it is by no means the case that before Modi's time as Prime Minister there were no religiously motivated conflicts. Tensions between the many religions in India are as old as the state itself.

Ultimately, Pakistan was founded as an Islamic state in the first place because, at the end of the colonial era, Muslims feared that they would not find any political representation in a state with a Hindu majority. In 1947 the two sovereign states India and Pakistan were founded. In the course of this division, several million Muslims left what is now India and several million Hindus and Sikhs left Pakistan.

Over a million people died in these gigantic refugee movements in both directions. The division in India and Pakistan is a social trauma that is still felt today. She is the dark and bloody side of independence. Even after the founding of the state, there were repeated violent, religiously motivated riots.

Modi's party BJP is stronger than ever

After the murder of the then Prime Minister Indira Ghandi, who was shot by two of her Sikh bodyguards in 1984, a real hunt for the Sikh minority began. 3,000 Sikhs fell victim to the fanatical mob. Modi's current politics touches a deep wound. It stirs up religious conflicts, thereby destabilizing not only internal peace in India, but in all of South Asia. Even so, he was re-elected last May, and the BJP is stronger than ever.

But the protests against the government also remain fierce. The fact that the riots took place when US President Donald Trump was visiting symbolizes the global dimension of this hatred. The pioneers can be called Modi, Orban or Trump.