What is action hard

Case hardening is the process of machining a workpiece made of steel by carburizing, hardening and tempering. The so-called case hardening gives you workpieces that have a hard surface and a soft, tough core at the same time. Case-hardening steels are primarily suitable for treatment with this heat treatment process.

Typical methods of carburizing are 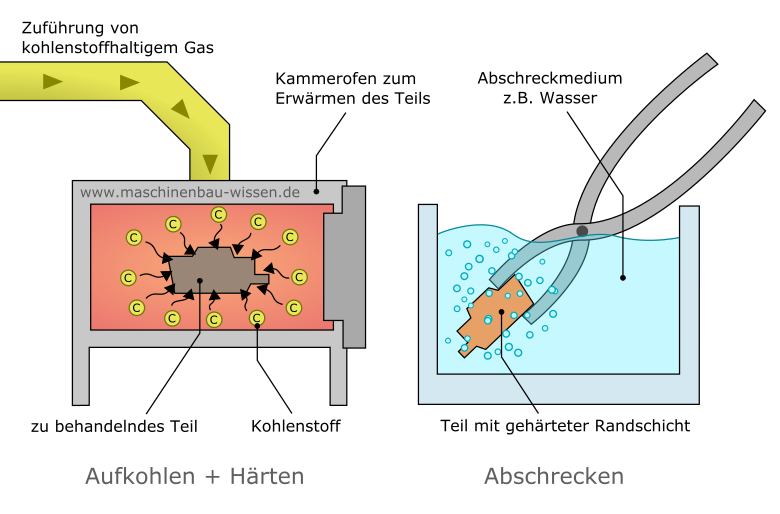 Structure and functionality of case hardening in a gas atmosphere

The surface hardness of a case-hardened steel is largely determined by the surface carbon content. According to the course of the carbon present in the surface layer, quenching results in a course of the hardness depth due to the two properties Edge hardness and Case hardening depth can be defined.

The hardening of a workpiece is followed by tempering as directly as possible in order to increase the ductility of the initially relatively hard martensite of the carburized surface layer.

Objective of the procedure

The aim of the case hardening process is to improve the mechanical properties of a steel workpiece. This includes, among other things, an increased surface hardness to increase wear resistance and resilience, a tough core to improve flexural fatigue strength and overload tolerance, as well as the improvement of fatigue strength. The latter is significantly influenced by the martensite formation during hardening. This leads to an increase in volume, which is higher in the carbon-rich surface layers than in the low-carbon workpiece core. Due to this effect, internal compressive stresses build up on the surface, which counteract the tensile stresses caused by bending and torsional loads. Cracks then only appear at higher stresses. Case hardening is therefore preferred in the manufacture of highly stressed parts such as those used in drives and gears.

Carbonitriding is a process related to carburization. In addition to carbon, nitrogen is also introduced into the surface layer.