Most diamonds are blood diamonds

The fight against blood diamonds has slowed down since the Kimberley Process was created in 2002. This year, however, the EU wants to tackle the issue more intensively and make dealers responsible.EURACTIV.fr reports.

This year the European Union is chairing the Kimberley Process, a system to fight against so-called “blood diamonds” or “conflict diamonds”, the trade of which finances wars in Africa. Around two thirds of the gemstones traded worldwide come from Africa.

Under the Kimberley System, the 81 participating countries are subject to strict guidelines for the import and export of precious stones. In addition, a certificate has been introduced with which the path of a diamond from the mine to the final sale can be traced.

Although the process covers almost the entire diamond trade in the world, its effectiveness is often questioned. The NGO Global Witness, which played a key role in creating the process, even left the group.

One point of contention is the relatively narrow definition of conflict diamonds. These are "rough diamonds that are used by rebel movements or their allies to finance armed conflicts against legitimate governments." Thus, many other human rights violations such as child and forced labor are not taken into account in the definition.

In fact, in practice the Kimberley Process has not always been able to ensure a “clean” daimante trade, for example in relation to Zimbabwe or the Central African Republic. (Raw) diamonds continued to be exported from the latter despite the suspension of the process after the unrest in 2012.

“The Kimberley Process did not stop the illegal export of diamonds from the Central African Republic. According to UN statistics, gemstones worth $ 24 million left the country in 2013 and 2014, ”explains Alice Harle of Global Witness.

Little will to reform

Since its inception, the Kimberley Process has not been reformed or improved due to the lack of political leadership. Reforms must be approved by all 81 participating countries. "It's a challenge - and no government wants to take the lead," criticized Harle.

The EU has already announced that its presidency aims to ensure "the implementation and effectiveness of the process". An unconditional will to reform sounds different.

She went on to say that "it has always been the great strength of the Kimberley Process that it goes beyond governments and involves civil society and the private sector."

A conflict diamonds law was recently adopted at EU level, which already establishes a framework for corporate responsibility in the extraction and commercialization of certain metals such as tin, tungsten, tantalum and gold.

“So the EU has already shown real leadership in the area of ​​social and environmental responsibility for companies active in economic sectors such as conflict minerals,” said Alice Harle of Global Witness. 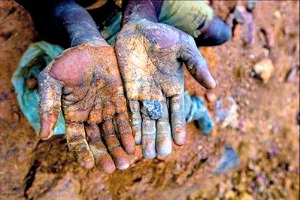 Whether in cell phones or laptops - many of our technical end devices process minerals, the extraction and sale of which finance the worst trouble spots in the world. The EU Parliament today approved a regulation aimed at preventing conflicts and human rights violations from being financed through the trade in minerals.

In May 2000, government representatives from the diamond-producing countries of sub-Saharan Africa met in the South African Kimberley to jointly develop strategies in the fight against conflict diamonds. Subsequently, the United Nations adopted a certification system for diamonds that came into effect in 2003.