What's so great about William Faulkner

The Swedish Academy could not agree on a candidate for the Nobel Prize for Literature in 1949. That is why the prize was only awarded the following year. William Faulkner received it for "his powerful and artistic contribution to the modern American novel". 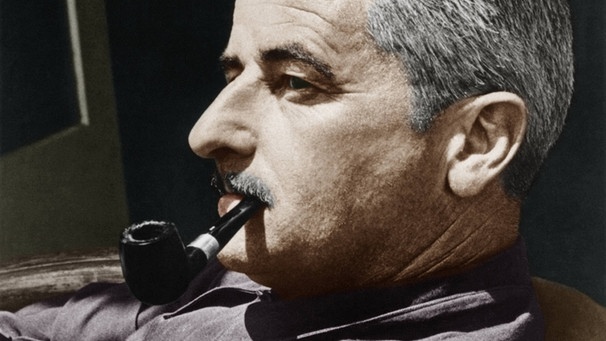 In 1940 William Faulkner (1897-1962) ended up in Hollywood. Faulkner cannot use the proceeds from his books to finance his Rowan Oak estate in Oxford, Mississippi. The director Howard Hawks has invited him; Faulkner has already worked with him on the script for Raymond Chandler's "The Big Sleep" and a template for Ernest Hemingway's "To Have and Have Not". But this time nothing comes of the planned collaboration: Faulkner secretly travels home to Oxford, 3,000 kilometers away.

Yoknapatawpha County as the location

Almost all of his novels, his short stories and even his poems are set in the American South, in the state of Mississippi, in the area around the small university town of Oxford. The American South can still be found here as if nothing had changed since the American Civil War. Faulkner gives his homeland a new, Indian name. For him, Lafayette County is called Yoknapatawpha County, much more primitive, the name becomes a synonym for Faulkner's world and its inhabitants.

William Faulkner's speech at the Nobel Banquet on December 10, 1950 in Stockholm.

The speech is also available as audio.

The novel "The Sound and the Fury" appears in 1929, the German translation "Schall und Wahn" only around a quarter of a century later (1956). The title alludes to the famous monologue of Macbeth, who describes life as a story full of noise and madness, told by a fool.

In intricate flashbacks, the story of the demise of the once proud Southern family Compson is told on three consecutive days in April 1928. In the first part, the mentally handicapped son of the family, Benjamin, describes everyday family life. The second part is told about the eldest son Quentin, who, because he does not meet his own and social standards, falls from the bridge into the river. The third part tells Jason, the youngest, who took over the role of the head of the family after the death of his father. He withholds from his sister Caddy's illegitimate daughter the money that her mother regularly sends her. At some point, the daughter discovers the hiding place in which Jason keeps the money, takes the savings and piles up with a boy from the fairground.

Literary practitioner, not a theorist

Faulkner did not have a school leaving certificate; he only got to university because he had volunteered for a few months in 1918. He gave up his studies after three semesters. Unlike most of his colleagues, he never made a secret of the fact that he was writing to make money. He didn't dare to talk to famous colleagues like James Joyce, whom he had once met in a Parisian coffee house.

Three years after "Schall und Wahn", Faulkner's perhaps most famous novel was published: "Licht im August". It was translated into German as early as 1935, making it Faulkner's first novel to be published in German.

It is the story of the murderer Joe Christmas, who gets his name because he was found as a foundling on Christmas Day in front of the door of an orphanage. In the 1932 novel, motifs from biblical history - betrayal, pity, sacrificial death - are woven into the traditional stories of a small community in the southern states. The novel is strongly influenced by the narrative technique of the stream of consciousness. The plot is not told chronologically, but rather interrupted by numerous flashbacks. To this day it is considered Faulkner's most widely read novel in Germany.

Lena sits on the side of the road and watches the wagon climb up the hill to meet her, and she thinks, 'I'm from Alabama: a beautiful piece of it. All the way from Alabama on foot. A beautiful piece. ' She thinks I haven't been out a month yet and I've already made it to Mississippi, further from home than I've ever been before. I am now further from Doane's Mill than I have been since I was twelve.
She hadn't come to Doane's Mill until her father and mother died, even if she'd gone into town six or eight times a year on Saturdays, in a wagon, in a mail-order dress, her bare feet flat on the floor of the car, and the Shoes, wrapped in a piece of paper, on the bench next to you. It wasn't until just before the wagon reached town that she put on her shoes. When she was a big girl, she asked her father to stop on the outskirts, then dismounted and continued on foot. She didn't want to tell her father why she wanted to go rather than drive. He thought it had to do with the smooth streets, the sidewalks. But it was because she believed that the people who saw her and passed them would think that she lived in the city too.