The mechanical tension (Formula symbol $ \ sigma $) is a term from strength theory, a branch of technical mechanics. It is the force per unit area that acts in an imaginary intersection through a body, a liquid or a gas.

With a normal load, the stress is evenly distributed over the surface, with a bending load there is a stress curve, and the Bending stress is the maximum value:

The bending stress, i.e. H. the stress at moment loading (bending) results from:

where $ M = | \ vec M | $ is the bending moment, $ I $ is the geometrical moment of inertia, $ z $ is the distance from the cross-sectional center of gravity to the edge fiber and $ W $ is the section modulus.

The following sketch illustrates this using a cantilever: 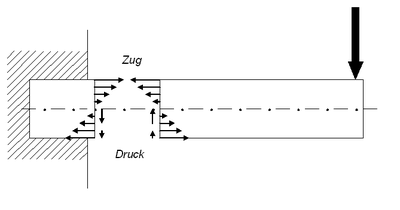 As a vector it has three components and it depends on the orientation of the cutting surface. The sense of direction is only defined when you define which side of the cut surface you are looking at, because tension is the force per unit area that the material that has been cut away in thought exerts on the remaining material. It is therefore directed in opposite directions in the two opposite cutting edges.

The stresses acting at a certain point are described in their entirety by the stresses in three intersecting surfaces that intersect at the point, i.e. by three vectors with three components each; these together form the stress tensor.

The stress tensor has the simplest representation if one chooses the three intersecting surfaces each perpendicular to a direction of a Cartesian coordinate system. The three forces in the three sectional areas correspond to the rows of the following matrix:

The meaning is shown in the following sketch of a very small volume element cut out:

The diagonal elements $ \ sigma $ represent the Normal stresses represent, i.e. the forces that act perpendicular to the surface. You will depending on the direction Tensile stress (positive sign) or Compressive stress (negative sign) (and their scalar size print) called. The off-diagonal elements $ \ tau $ are saved as Shear stresses designated. They act tangentially to the surface, so they represent a load on shear.

The shear stress curve is used to illustrate the shear stresses that occur in relation to the reference axis within a profile loaded with a transverse force. If the shear force acts outside the center of shear, torsion occurs.

The tensor calculation allows the stress state to be described initially independently of a specific coordinate system and only after the respective calculation method has been derived, the component equations can be adapted to the geometric properties of the body, for example in cylindrical coordinates. In the tensor calculation, the stress tensor is defined as the second level tensor which, scalar multiplied by the outer surface normal of a section surface, results in the force vector per unit area.

Every stress state can be converted into a coordinate system by means of a major axis transformation, in which all shear stresses disappear. If the three normal stresses are combined into a vector in this coordinate system, this can be broken down into two components:

The respective Main stress direction results from the equation $ (S- \ sigma E) \ vec e = 0 $, where the calculated principal stress is used for $ \ sigma $. The solutions $ \ vec e_ {1}, \ vec e_ {2}, \ vec e_ {3} $ are eigenvectors of the stress matrix S. and indicate the direction of the stresses. In normalized form, they form an orthonormal basis of three-dimensional space, provided none of the principal stresses is equal to zero.

The family of curves of the main stress lines is called Trajectory. A geometric representation of the stress components in different coordinate directions in the plane stress state is given by the Mohr stress circle.

The tensions that occur without external forces acting on the body are also Residual stresses called.

A hydrostatic stress state exists when the three principal stresses are equal.

The voltage in gases is described in the Boyle-Mariotte law and in the Gay-Lussac law.