What are the benefits of biofuels 1

7 interesting points about next generation biofuels 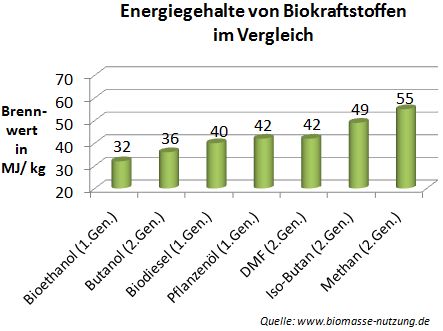 Despite the continuous further development of bioenergy in terms of its production technologies, infrastructure and ecological balance, there is still criticism of some of the bioenergy systems. The critics primarily focus on certain first-generation biofuels. Criticism is just as necessary as showing potential. Here is a list of 7 points that we can look forward to with the biofuels of the future.

The term "second generation biofuels" can be read more and more frequently in the media and is based primarily on the following further developments compared to the first-generation biomass-based fuels:

Here are 7 points that give a little insight into the successor models of biofuels (see overview) give.

1. Thanks to higher production quantities per area, less space required for production

The future use of the whole plant or the separation of the food crop from the remaining components for biofuel production means that less space is required to produce the same amount of fuel.

A convincing example of the decreasing space requirement is, for example, the cultivation of algae as the basis for the production of biodiesel and bioethanol. Algae can be grown in bioreactors, which because of their spatial dimension show more biomass growth per area. Required systems can also be set up on barren areas or industrial wastelands.

The "tank or plate question" is a dark chapter in the biofuel discussion. Even if the one-sided criticism that biofuels are responsible for the high food prices or famine in the world certainly falls short (see e.g. Article on Western Farmers Press), nobody wants to contribute to such developments.

Through the use of completely new energy crops or plant components and the use of areas that were previously unsuitable for the cultivation of high-quality food, the direct competition between food and energy crops can at least be greatly reduced. Examples are “cellulosic ethanol” (made from fast-growing grass or wood) instead of “grain ethanol” or biofuel based on algae cultivation.

Biomass (e.g. cellulose, hemicellulose), which is significantly less rich in high-quality nutrients, can be used for the coming biofuels. This means that it can be purchased more cheaply than biomass with a high protein or fat content, for example.

If we stick to one of the most promising of the “next generation biofuels”, cellulose ethanol, the costs for the enzymes necessary to break down the polysaccharide have so far been proportionally the highest and have accounted for around 50% of the total costs per liter.

Innovations by US companies Novozyme and Genencor in the area of ​​enzyme technology have reduced the cost of manufacturing 1 gallon (about 4 liters) of cellulosic ethanol from about US $ 4.5 to less than $ 2. See also the Article on the profitability of industrial cellulose-ethanol plants the New York Times (in English).

In combination with the increasing industrial production of second generation biofuels, optimized manufacturing processes and the lower raw material costs, the overall production costs are lower. Ultimately, this will also lead to a drop in the price of biofuels at the filling station and further improve competitiveness compared to fossil fuels.

This point applies above all on a global scale. The production of biofuels is too expensive to be taken over by each rural district under economically justifiable conditions. Industrial production can therefore not be avoided if competitiveness with fossil fuels is to be achieved as soon as possible. The international or even intercontinental transports of biomass could, however, be significantly restricted thanks to future biofuels.

The reason for this development will be the greater flexibility in the input materials used (e.g. wood, grass, waste, etc.). Discoveries from the fields of biotechnology (see article on enzyme technology) and the agricultural economy broaden together with new or newly discovered processes like the Hydrothermal carbonization and the Fischer-Tropsch process form the basis for the production of biofuels.

This increases the chance that countries will also have their own biomass sources in the future, which would depend on imports of renewable raw materials or “finished” biofuels when using traditional manufacturing processes.

Furthermore, by increasing the production volume per hectare (see point 1), the required biomass can be obtained within a narrower radius around the biofuel refinery. This can reduce transport costs and environmental pollution.

In return, the production of next-generation biofuels will be more difficult and more complex plants will probably be necessary.

5. Continuous harvest throughout the year with higher energy contents

The production and harvest of the usable biomass raw materials is not only possible once or twice a year, as with previously cultivated energy crops for first-generation biofuels (e.g. rapeseed, rye, wheat, oil palm, corn, etc.), but is theoretically possible Distributed throughout the year and continuously conceivable.

As the most innovative source for continuous harvest periods, the oils and carbohydrates from microalgae cultivation are certainly to be mentioned at this point. The energetic use of microalgae grown in photoreactors or ponds has been intensively researched for around 20 years. The algae biomass, which is growing over the entire year, and the targeted use has meanwhile passed through the phase of basic research and pilot projects and is ready for commercial plants.

The use of grass and wood does not depend on the use of the plant fruit, but can be harvested all year round and at the point in time when the energy farmer thinks it is right.

I researched the values ​​of the graph from various sources on the Internet and unfortunately they are not the result of a specific study. If you know other values ​​than these average values, it would be very exciting to hear about them. When calculating the energy content of the later fuel, it is of course important to consider whether it is a pure fuel or whether the biofuel is mixed with a quota.

The USA with its high fuel demand is currently a major promoter of biofuels of the next generation. As far as I know, the Americans, along with the Swedes, have so far announced the construction of the first plants for the new biofuels that go beyond demonstration plants. Below are two industrial plant projects that were announced last month and whose implementation is to start in 2011:

Verbio AG's bioethanol plants in Schwedt and Zörbig also produce what is known as a by-product "Verbiogas" (see article), which is a biomethane obtained and processed from residual materials such as stillage and straw, which can be used as fuel in vehicles that use natural gas. This production principle thus combines the production of 1st and 2nd generation biofuels, whereby a high degree of energy use and a remarkable climate balance can be achieved by current standards. A good transition to point 7 ...

7. The ecological balance of biofuels is improved

A frequent criticism of some first generation biofuels is that they should not have a better ecological balance than fossil fuels. This is certainly a highly complex topic and cannot be dealt with in just two sentences. The fact is that the next generation of biofuels (e.g. cellulose ethanol or BtL biodiesel) will have an even better carbon footprint than those of the first generation and up to 90% CO2- to save emissions compared to the fossil representatives.

Conclusion on next generation biofuels

Despite the advantages, there are of course still challenges that have yet to be overcome in the production and use of biofuels.

With all the sympathy for the next generation of biofuels, in my opinion it should also be avoided that the various biofuels are played off against each other, because depending on the location, each fuel can have its advantages. Due to the interaction of several fuel generations, the growing demand for them can be spread over several shoulders. The path to second generation biofuels is via first generation fuels. That is why, in my opinion, it is also worthwhile to forgive the difficulties involved in the introduction of E10 and to take into account the experiences made with future biofuels.

The International Energy Agency (IEA) has published and published a comprehensive paper (as of February 2010) on next-generation biofuels can be read HERE.

What is your opinion on the development of biofuels and what potentials and points of criticism do you see? Thanks for reading and special thanks to each commenter.