Why is there water scarcity in Africa 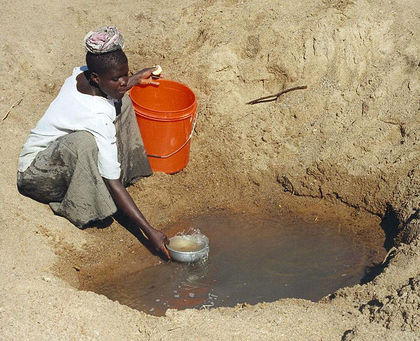 Sub-Saharan Africa covers an area of ​​24 million km2, on which a total of 838 million people lived in 2011. At 2.6% per year, population growth is more than twice as high as the global mean of 1.2% per year. Although the growth rate has slowed somewhat recently, the total population is expected to be around 2 billion in 2050. There will be particularly strong increases in the cities and urban slums. At present, however, 61% of the population still live in rural areas and are highly dependent on directly available water resources. The economy of most African countries is primarily based on agriculture, which in turn is almost exclusively dependent on precipitation. The growth in agricultural production of 2% annually does not keep up with the population growth. One reason is the low proportion of irrigated agricultural land of only 5%.[1]

The renewable freshwater resources of Africa are 4000-4500 km3 estimated per year. However, the freshwater withdrawal is only about 5% of this. The use of groundwater plays a prominent role here because groundwater is less dependent on climate fluctuations and of better drinking water quality than the water resources in rivers and lakes.[2]

Only 20% of the total precipitation feeds the renewable water resources of the rivers, lakes and the groundwater. Mainly due to population growth, but also due to decreasing rainfall, these resources are 16500 m3 per inhabitant in 1960 at 5500 m3 per inhabitant decreased in 2005. Although groundwater accounts for only 15% of renewable resources, 75% of the African population use it as their main source of drinking water. The pressure on scarce water resources has increased significantly not only due to the growing population, but also due to a higher standard of living and poor water management. Last but not least, one problem is the poor quality of the available water, which is not infrequently contaminated and acts as a source of diseases such as malaria, diarrhea and cholera.[1]

Two thirds of the area of ​​sub-Saharan Africa is arid or semi-arid. More than 300 million people live here, less than 1000 m3 Water is available per year and person and thus suffer from severe water scarcity. The mean rainfall in Sub-Saharan Africa is 815 mm per year. However, they are very unevenly distributed both over the course of the year and spatially. Most of the rainfall receives the areas along the equator, especially in the zone from the Niger Delta to the Congo Basin.[1] A third of the African population lives in areas threatened by drought, such as the Sahel, the Horn of Africa and southern Africa.[3]

The fluctuations in precipitation in Africa are very high. Up to 95% of the annual precipitation deviates by 20 to 40% from the mean. The consequence is, among other things, large differences in the flow rates of the rivers. The South African rivers even show the highest fluctuations in discharge in the world. The impact of uncertain rainfall on groundwater resources is largely unknown.[2]

Droughts and floods are common in West, East and South Africa. In the past, precipitation in the Sahel zone has shown significant fluctuations in the decades, which were associated with changes in the atmospheric circulation, which in turn were influenced by surface temperatures of the Atlantic and Indian, and in some cases also of the Pacific Ocean. After a wet period in the 1950s and 1960s, there was a very dry period from the 1970s to the 1990s.[3]

Water shortages caused by droughts primarily endanger agricultural production. For example, the drought in Kenya between 1998 and 2000, which was associated with the La Niña conditions at the time, reduced the country's gross national product by around 6%. But also floods threaten agriculture and water resources. They destroy the infrastructure and the dwellings of the rural population and flood the fields with contaminated water.[1]

Climate change is very likely to exacerbate Africa's water problems. Model projections show, largely in agreement, a significant decrease in runoff volumes in North Africa and an increase in East Africa. The results are inconclusive for the other regions. The model results differ widely, especially for the Sahel region. By the 2050s, a total of around 500 million people in Africa could suffer from water stress. According to model calculations, people in North and South Africa will be particularly affected, while in East and West Africa a reduction in the water shortage is more likely than an increase.[3]