It can be found in Asian food, in ready meals, potato chips or spicy sauces. Even natural foods contain the flavor carrier Glutamate. Critics suspect that the substance promotes nervous diseases such as Alzheimer's and Parkinson's. 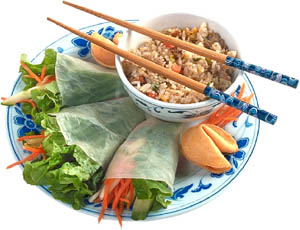 Glutamate is still referred to as a flavor enhancer, but that's actually wrong.

Japanese scientists have since found out that the white powder itself has a taste. Umami, in German "delicious", is the name for the piquant, spicy and bouillon-like aroma in Japan. As sodium glutamate, it is added to savory ready-to-eat and frozen meals, sachet soups, spice mixes, salad and seasoning sauces, among other things. In Asian countries it is even on the table as a condiment. Glutamate came under fire in the 1970s due to the so-called "Chinese restaurant syndrome". After eating Chinese food, people repeatedly suffered from tingling or numbness in the neck, arms and back, feelings of weakness and palpitations. The flavor enhancer, which has been used in Chinese cuisine for almost 100 years, was suspected to be the cause of the complaints. Interestingly, the symptoms occurred predominantly in Americans and Europeans, in China and Japan themselves the intolerance is virtually unknown. Asians use around 80 percent of the glutamate produced worldwide. Over the past 30 years, Chinese restaurant syndrome has been reviewed in several studies. In particular, double-blind tests, in which the test subjects did not know whether they were receiving glutamate, could not prove a connection between symptoms and the intake of glutamate. Only with very high amounts between three and five grams on an empty stomach were there isolated intolerance reactions, which, however, were not statistically confirmed.

Glutamate: poison for the nerves?

Glutamic acid and its salts, the glutamates, also occur naturally in many foods, e.g. B. in cheese or tomatoes. The body itself also produces considerable amounts of the important amino acid every day. Natural free glutamate and the monosodium glutamate used as a flavor enhancer are equally well absorbed and metabolized by the human body. The amino acid is required as a starting material for the body's own proteins and plays an important role as a messenger substance in the brain. As a neurotransmitter, glutamic acid is involved, among other things, in the transmission of pain, body growth, weight regulation and appetite control. The cells of the brain produce the required glutamic acid themselves. The glutamate supplied with food cannot cross the blood-brain barrier, at least that is the opinion of current science. Even with a diet rich in glutamic acid, no increased concentrations were found in the brain.

Can glutamate cross the blood-brain barrier?

Critics disagree. In their opinion, the blood-brain barrier is not completely tight, but can be disturbed, for example, in diseases such as meningitis, Alzheimer's or internal bleeding. In the case of a stroke, z. B. is released from the brain cells glutamate, which can destroy these cells. Scientists were also able to observe the destructive effect on the brain in animal experiments. For this reason, critical voices also refer to glutamate as a neurotoxin. The Heidelberg Alzheimer's researcher Professor Konrad Beyreuther considers a connection to diseases such as Alzheimer's and Parkinson's to be possible. A damaging effect only occurs when extremely high doses act on the brain cells. And this is extremely unlikely in healthy people, even with a diet rich in glutamic acid, due to the blood-brain barrier, among other things. If the brain metabolism is disturbed, however, damage is at least conceivable.

What dose of glutamate is dangerous?

On average, a Central European only consumes around 0.3-0.5 grams of glutamate per day as a flavor enhancer. We consume around one gram of naturally occurring free glutamate from vegetables, cheese and sausage products alone. Incidentally, only the free form has the flavor-enhancing effect.

This post is
in the UGBForum,
published by the specialist magazine for sustainable nutrition.
“More

The front runners are Roquefort cheese with 1280, Parmesan with 1200, soy sauce with 1090, mushrooms (can) with 240 and tomatoes with 140 milligrams per 100 grams. In addition, around 10-20 grams of natural, protein-bound glutamate is served on the table and forms around 50 grams the body itself every day. Depending on consumption habits, however, the intake of glutamate can be significantly higher for individual people. Anyone who regularly uses stock cubes, yeast extracts and sachet soups or who feeds pizza and potato chips every day can easily reach amounts of over 1 gram per day. But even with a diet rich in glutamate, we only achieve the quantities that are common in Asian countries. Around 1.2-1.7 grams of flavor enhancers are eaten there on average every day. And nothing is known of a particular accumulation of Alzheimer's or Parkinson's in China or Japan, even if the incidence rate is increasing there as in Western countries.

Authorities give the all-clear: glutamate has not been proven to be harmful

Due to the scientific data available, various national and international expert committees such as the FAO and the EU's Scientific Food Committee have given the all-clear: a harmful influence of free glutamate on humans cannot be proven and its use as a flavor enhancer is therefore harmless. Nevertheless, the experts are calling for further large double-blind studies. The fact is that individuals are sensitive to glutamate. Even severely asthma sufferers may be particularly sensitive to glutamate. If you do not show any intolerance to foods containing glutamate, the occasional consumption of instant soups or potato chips will certainly not have any consequences. However, it is not advisable to ingest larger amounts, especially for children and adolescents. On the one hand for culinary reasons. Because those who regularly expose themselves to the uniform taste of glutamate lose sensitivity to the natural aroma of food. In addition, the flavor enhancer is said to stimulate the appetite and can thus possibly contribute to obesity. It should also be worrying that glutamate production and thus consumption has increased fivefold since the 1970s.