When "Bowling for Columbine" hit cinemas in the US in mid-October this year, it was inappropriately just the right time: While the Washington sniper was murdering indiscriminately, Michael Moore's documentary satire investigated the American gun craze. Initially only started with a few copies, the film has developed into a real hit and stayed - exceptionally for a documentary - in the top ten of the US box office for over a month.

Has America been waiting for this film? In the land of a quarter of a billion firearms, killing from their use is also the second most common cause of unnatural death, after traffic accidents, according to statistics. With your own weapon you show "American responsibility", as the vigilante explains in the film: "Who else will protect your children?"

"Bowling for Columbine" is a film by Michael Moore, probably the best-known US documentary filmmaker since 1989's "Roger and Me". And that means that the causes of a phenomenon are investigated with penetrance and humor: "Are we crazy about guns - or are we just crazy?"

Right at the start, Moore can demonstrate how easy it is to get hold of a firearm in the USA: He goes into a bank in the best Cinéma Vérité style, opens an account - and receives his welcome gift with no problems.

The two-hour film is edited with television clips, police videos, cartoons and interviews. The filmmaker initially follows the chance that in his hometown in Michigan not only one of the two bomb bombers from Oklahoma City grew up, as well as one of the two gunmen from Columbine High School in Littleton, but also the gun lobbyist and ex-Hollywood star Charlton Heston. Of course Moore pays an uncomfortable visit too.

So why are an average of 11,000 people shot dead in the United States every year, even though there are just as many weapons in circulation in other nations, such as neighboring Canada? One of Moore's conclusions: American history has been frightened since the beginning - from the persecution of the pilgrim fathers in the ancient world to the fear of the "black man's revenge" for slavery and exploitation to the terrorist attacks of September 11, 2001. 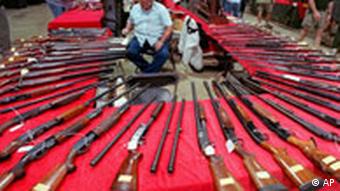 Moore therefore does not limit himself to the level of interviews, but introduces a slightly polemical meta-level with a rapid montage of the US military interventions of the past 50 years. Moore sees paranoia in the US as a socio-psychological problem. And he asks about the social causes: violence arises not least from social insecurity. Moore's search must be unsuccessful - for definitive answers. But it raises connections that have been neglected by the media: education as the first step towards improvement.