What does a look under the hood mean?

A look under the hood of the ARK ETFs

The portfolio is pretty compact with just 48 stocks. About half of the assets are concentrated in the top 10 titles. The top holding company is Tesla - an integral part of this and other ARK portfolios since 2014. The share now makes up about 11% of the company's assets. ARK Invest CEO Cathie Woods pursuit of breakthrough innovation is not limited to the United States; the fund currently invests around 20% of its assets in international stocks such as Materialize, CRISPR Therapeutics and Shopify.

Active approach in the guise of an ETF

Measured against the standard index, the fund is managed very actively - only around 3% of the portfolio consists of stocks in the S&P 500, the benchmark mentioned in the sales prospectus. But the ETF is also very active when measured against Russell 1000 Growth, which is more representative of the fund: The active share (a measure of the degree of portfolio overlap) is over 92%, which means that only about 10% of its holdings track the index .

Unlike many growth-minded managers, the ARK Innovation is not locked into technology stocks. Instead, almost a third of the fund's assets are invested in healthcare stocks, including 17.8% in biotech stocks. Communication service providers also play a major role thanks to investments such as Roku, Spotify and Twilio. The fund's weighting in tech stocks, while slightly lower than average overall, encompasses a wide variety of software applications and software infrastructure names. At the same time, the fund is underweight in cyclically sensitive sectors such as industrials, materials and financials.

Graphic: The sector allocation of the Ark Innovation 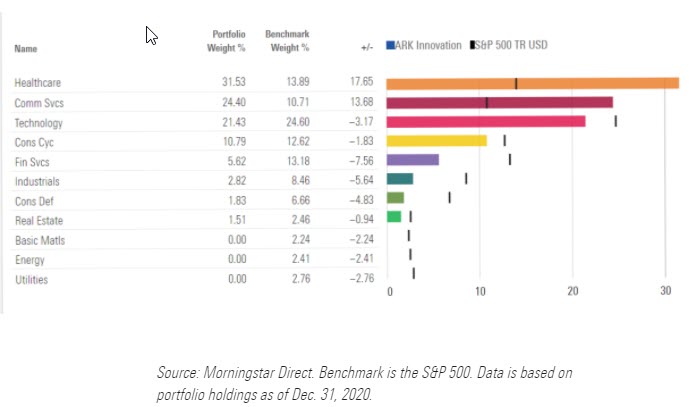 Now let's take a closer look at the fund through the lens of the eleven factors of the Morningstar Global Risk Model. They help to shed light on the portfolio's underlying risk. These are normalized z-scores that cover a scale from minus 2 to plus 2. The universe is made up of 7,000 US stocks. Six of the eleven factors (valuation, valuation uncertainty, economic moat, financial health, ownership risk, and ownership popularity) are based on Morningstar's fundamental equity research and generally available company data. The other five factors (liquidity, size, value growth, momentum, and volatility) are traditional risk factors that have been extensively studied in academic research. 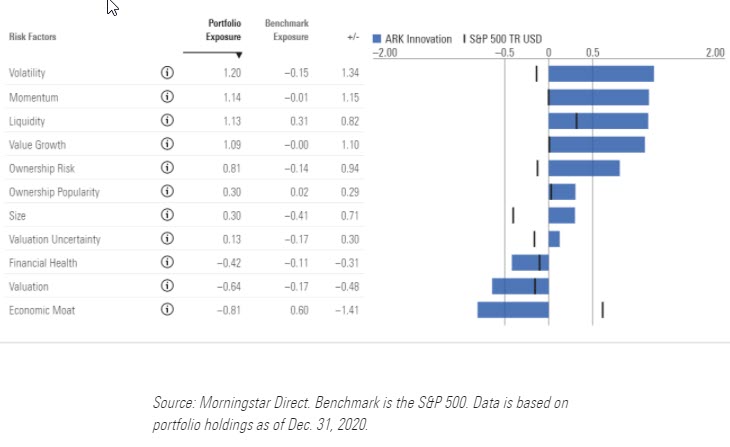 Volatility: Our volatility factor is based on the fluctuation range of the historical prices of a share over the past twelve months. The holdings of the ARK Innovation show a significantly above average volatility, with a score of 1.20 compared to a negative 0.15 for the S&P 500. Larger holdings such as Tesla, Square and Invitae are significantly more volatile than the broader market. Fund manager Cathie Wood throws in a few less volatile names like Intercontinental Exchange and Nintendo, but these are the exception rather than the rule. Over the past five years, the ETF's volatility has been among the highest in the Morningstar Mid-Cap Growth category.

Momentum: The holdings of ARK Innovation have a very high momentum factor, as the score of 1.14 against a negative 0.01 for the S&P 500 shows. Here too, companies such as Tesla, Twist Bioscience and Zoom Communications contribute to the fund's strong momentum orientation. Shares with a strong momentum bias have done particularly well in recent years, which has given the fund a tailwind.

Liquidity: The liquidity factor measures the average trading volume of a share over the last month in relation to the total number of shares outstanding. It is a measure of how quickly ownership of a stock changes hands between different investors. The holdings of ARK Innovation score above average here, as the portfolio score of 1.13 compared to 0.31 for the S&P 500 shows. But that can convey a false sense of security. A high trading volume is generally advantageous, but this can change very quickly. While many ARK favorites may be popular right now, trading volumes can quickly dry up if they fall out of favor. The Fund's penchant for concentrated positions could also create liquidity issues if it is forced to sell stocks to meet investor redemptions, especially positions where Ark owns a large percentage of the outstanding stocks.

Value growth: This factor measures the value and growth characteristics of a portfolio. It is based on how the market rates a stock. Here the key figures profit yield, dividend yield and the book value are in the foreground (relative to the universe). A low score indicates a value bias, a high one a growth bias. The stocks in ARK Innovation show a strong growth orientation. The top holdings Tesla, Roku, CRISPR Therapeutics, and Square are highly rated. In fact, only two of the holdings Intercontinental Exchange and Taiwan Semiconductor Manufacturing are rated as value stocks.

Ownership risk: We measure ownership risk by comparing the risk profiles of funds that own identical stocks. If funds or portfolios tend to have a high risk profile, we assign a higher Ownership Risk Score. ARK Innovation's holdings have an above-average risk, with positions such as Invitae, Editas Medicine and Organovo having particularly high scores. Invitae, for example, is mainly held by small-cap index funds. ARK Investment Management owns approximately 15% of the outstanding shares.

Ownership popularity: This factor represents changes in the popularity of a particular stock from the fund manager's perspective. High popularity ratings indicate that more fund managers have increased their positions in the stock in the past few months. ARK Innovation's holdings perform above average on this metric, with a z-score of 0.30 versus 0.02 for the S&P 500. But while most of its holdings are clearly trending and in vogue, few of its are trending Holdings (including Unity Software and Seres Therapeutics) at extremes in view of their popularity with other fund managers.

Graphics: The ARK Innovation as reflected in the Morningstar Style Box 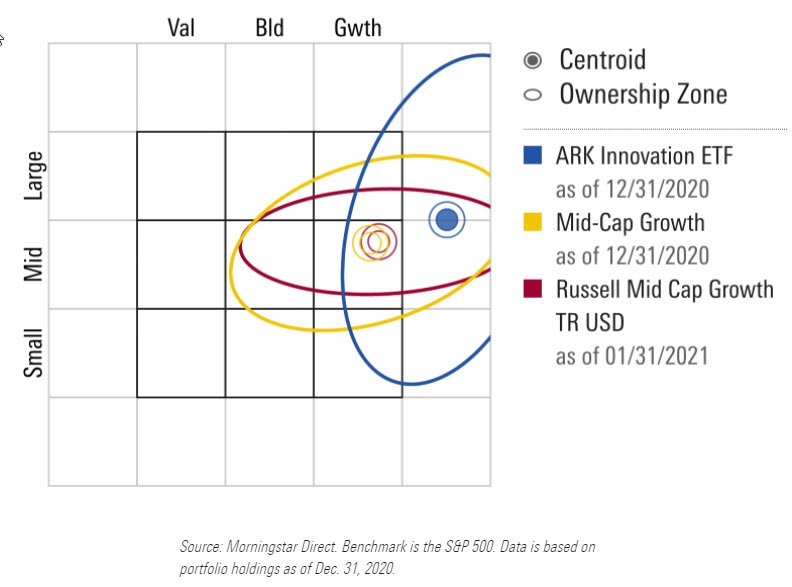 Rating: The valuation factor measures how cheap or expensive a stock is compared to Morningstar's quantitative fair value estimate, a statistical estimate of fair value based on a company's projected future cash flows. Higher values ​​indicate that the stock is undervalued and more likely to generate positive economic returns, while lower values ​​indicate a higher valuation. The ARK Innovation portfolio scores well below average on this metric, with a score of minus 0.64 compared to minus 0.17 for the S&P 500. Based on this metric, the ratings of the holdings look almost consistently expensive. For example, CRISPR Therapeutics was trading at approximately $ 150 per share on February 16, a premium of more than 50% over its quantitative fair value estimate of approximately $ 110 per share.

Assessment uncertainty: The valuation uncertainty factor is based on the Morningstar Quantitative Uncertainty Rating and measures the degree of uncertainty inherent in a company's quantitative fair value estimate. Companies with less consistent operating income and capital expenditures tend to have less stable cash flows, making it more difficult to establish an estimated fair value. Higher scores imply greater uncertainty. Accordingly, portfolios with high values ​​for valuation uncertainty tend to have higher volatility in returns. The holdings of ARK Innovation have an above-average value for valuation uncertainty, with a portfolio score of 0.13 versus a negative 0.17 for the S&P 500. Holdings such as CRISPR Therapeutics, Invitae, Zillow and Pure Storage are not only volatile, but also difficult to assess what is another potential risk.

Financial health: Financial health is based on the strength of a company's balance sheet and equity volatility. Higher scores mean portfolios with greater financial health and lower risk of bankruptcy. Stocks that do well on this factor tend to hold up better during economic downturns, such as Take the 2008 global financial crisis, for example. Ark Innovation's holdings underperform in financial health, with an average z-score of minus 0.42 versus minus 0.11 for the S&P 500. Many portfolio holdings are not yet making profits or free cash flows, which makes them potentially vulnerable when they run out of cash to support their business.

Economic moat: The Economic Moat Factor is based on the Morningstar Quantitative Economic Moat Rating, which measures the strength of a company's competitive advantage based on the sustainability of its profits. Higher scores indicate that a company is able to keep competitors in check for an extended period of time. The holdings of ARK Innovation have a significantly below average value for the economic moat factor, with a portfolio score of negative 0.81 compared to plus 0.60 for the S&P 500. About a third of the fund's holdings - including Tesla, Square and Proto Labs - have a narrow moat rating, but the majority of the portfolio is made up of companies with no moat. This hasn't hurt performance so far, but the holdings could suffer if competitors attack and increased competition negatively impacts their market share and profitability.

The outstanding performance of the ARK Innovation testifies to the management's ability to be in the right place at the right time and to convert the digitization trend into outperformance. However, a closer look at the portfolio reveals a lot of potential risks. In fact, the portfolio's risk level in ten of eleven factors examined in Morningstar's Global Risk Model is well above the average US equity fund. And that the liquidity risk may not be as low as it appears in the investigation. Trading volumes can quickly dry up when valuations collapse or market favorites fall out of favor. In the event of high returns, it could be difficult to liquidate some of the holdings in which the ETF has high positions (and a high proportion of the free float).

The Fund's rapid asset growth is another risk factor that is not directly included in the eleven factors discussed above. It is a popular target for hedge funds, day traders and short sellers, and any reversal in cash flows could result in a downward spiral, including negative price effects if the fund is forced to liquidate positions in an awkward position. Investors fascinated by the fund's prime returns should be aware that upside excesses are often corrected for. In the case of ARK Innovation, the previously neglected risk factors could then come to the fore with power.

Don't miss a thing! With our Morningstar Research Newsletters for investors, you get the most important research from Morningstar fresh on the table, promptly, free of charge and in understandable language! Here you can register for our fund and ETF newsletters - and always stay up to date!

The analysis in this article is based on our professional investor tool. For more information on Morningstar Direct, please visit here.

To read this article you need to log in