What is a high pressure turbine

A paddle wheel is the core of a turbine. It is driven by water, wind, steam or gas. This causes the axis to rotate.

The turbine is a machine that is powered by water, wind, steam or gas. As a result, the inner part begins to rotate around its own axis. The Latin word "turbare" means: to turn. A generator is connected to the turbine, which generates electricity.

Fire was the first natural force that man used for his needs. The second was the use of the wind, the third the use of water power: this could be used to operate pumps, mills, giant hammers and much more. They replaced the strength of humans or animals.

Turbines are actually water wheels that have been further developed. They are so important today because they produce almost all of the electrical power in the world. This also applies to nuclear and coal-fired power plants. Without turbines, electricity can almost only be generated with solar panels. This has only been around for a very short time.

What types of turbines are there? 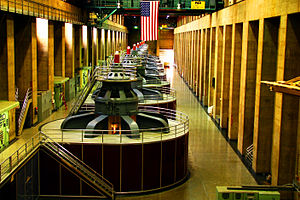 Modern turbine house in the USA

It depends on what drives the turbine. There are two different systems for water turbines: One is in a river with a dam. There is a lot of water there, but it doesn't fall far. It also flows slowly. These turbines have few blades like a ship's propeller, but they are huge.

The other water turbines are in the mountains. The reservoir is high up. There, much less water flows down through the pipes, but it comes into the machine at very high pressure and at high speed. This turbine has more blades, but they are smaller.

Nuclear power plants and coal-fired power plants make water hot. This creates steam. This pushes out of the container and drives the steam turbine. This has a lot of blades, but they are quite small. These turbines look similar to an aircraft engine.

Gas turbines are even more similar to aircraft engines. You have even more and even smaller shovels. Before the gas and air enter the turbine, the mixture is compressed. This makes the turbine even stronger.

Today's wind turbines only have three blades. They are called rotor blades. Their shape looks very similar to airplane wings and they can be up to 100 meters long.