Neutrino is a fundamental particle of universes

Where ghost particles arise in space

Extragalactic neutrinos flow through the entire universe - but where these ghost particles come from was a mystery until recently. Researchers have now discovered their origin: They are created in cosmic particle accelerators.

Four different publications in the journals "Science" and "Monthly Notices of the Royal Astronomical Society" report on this discovery today - probably a sign that the researchers of the IceCube collaboration have caught a very special catch in the detector network. A neutrino, also known as ghost particles, was caught. The neutrinos are ghostly in that they normally race through space completely unnoticed.

Can you feel neutrinos?

"When a high-energy neutrino hits the human body, we don't feel anything," explains David Paneque from the Max Planck Institute for Physics. "The neutrinos show up indirectly in detectors: when they interact with an atomic nucleus, a muon is created, which in turn creates light - the light is the signal that we measure."

Every second, around 60 billion of these elementary particles hit an area the size of our thumbnail - and penetrate it smoothly. The fact that we do not notice any of this is due to the fact that these particles hardly interact with normal matter. At best, they become noticeable when they hit an atomic nucleus with pinpoint accuracy. And that is extremely unlikely.

Alarm on the south pole

But sometimes it does happen. On September 22, 2017, the underground measuring instruments of the IceCube observatory struck near the South Pole. A shower of cosmic neutrinos had crashed into the one cubic kilometer block of ice detectors. One of them turned out to be extremely high-energy, the instruments indicated 300 trillion electron volts - that is almost 50 times more than the large particle accelerator at CERN is able to produce. 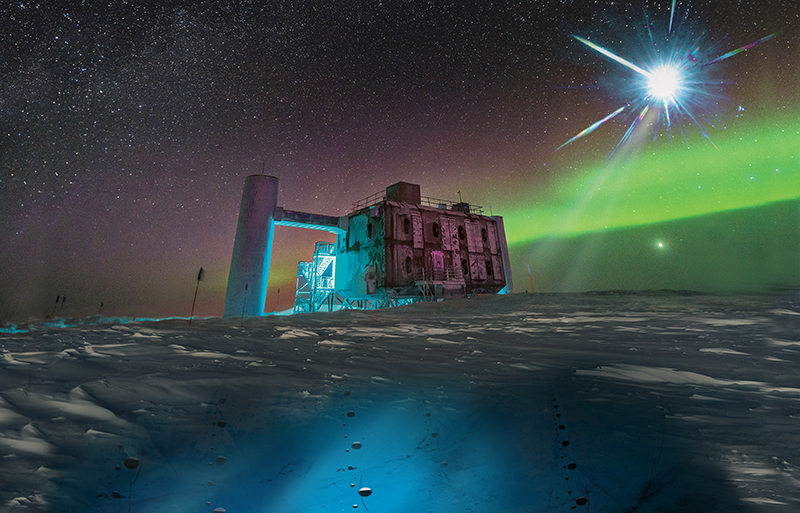 From the signal, the researchers first reconstructed the trajectory that the neutrino had taken through space. Then an "Astronomer’s Telegram" was sent to colleagues on all continents, with the request that they should look for conspicuous signals in this direction.

One such was quickly found: the Fermi-LAT space telescope projected the trajectory of a supermassive black hole several billion light years away, which sucks in matter and accelerates or heats it so strongly that a bundled stream of particles and radiation shoots into space . Astrophysicists call such cosmic particle accelerators blazars.

Hurled into space by a black hole

Measurements of the MAGIC telescopes on the Canary Island of La Palma confirmed: The radiation from the Blazar TXS 0506 + 056 in the constellation Orion has exactly the energy that matches the neutrino. The neutrino measured at the South Pole most likely originates from there. When the particle began its journey through space around 3.8 billion years ago, the first primitive life forms were just emerging on earth.

Thus, one of the great mysteries of astrophysics has been solved. And a second about it: Until now, it was unclear where some of the cosmic rays discovered more than 100 years ago came from. 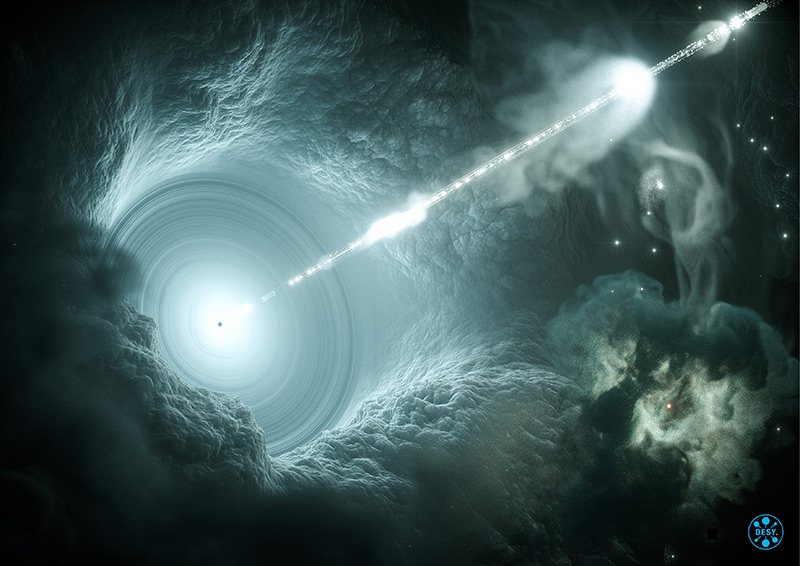 Blazar: A jet escapes from the center of a galaxy

The “normal”, i.e. not quite as energetic cosmic radiation “comes from supernova explosions in our galaxy,” says Klaus Helbing from the University of Wuppertal, a member of the 300-strong research team. “But there are also parts that reach energy ranges that are several orders of magnitude higher than the newly discovered neutrino. We are talking about ten trillion electron volts here. "

As the researchers found out, the neutrinos are apparently descendants of extremely accelerated protons. This suggests that the high-energy cosmic radiation is also shot into space by blazars.

However, one big question still remains to be answered: why the neutrinos have a tiny - but still present - rest mass cannot be explained with the conventional theory, the standard model.

Here, too, the hopes rest on IceCube: Should a particle from the time shortly after the Big Bang get lost in the detector block, it could point the theorists to the holy grail of particle physics: to the great unified theory that unites all natural forces of the universe.

More on this topic: