Have any famous Quorans died 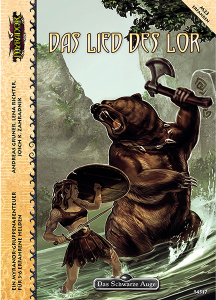 The new Myranor adventure, which will soon be available under the title The song of Lor Comes on the market has an eventful past behind it, even if not quite as eventful as the past of the Lordal, which the adventure is about. It began its story under the working title “Shift in the shaft in Hjaldingard” and was supposed to take place there. Most Thorwals players know that the Thorwals once emigrated from the Güldenland. A smaller number of players may be aware that this exodus was by no means complete and that Hjaldingard still exists. This is where the team of authors wanted to start and take a look at the past and present of this people.

The fixed point of the original concept was a great evil that threatens the whole country and which one has to face in a mighty cave after researching the sagas and legends of the country. As the working title suggests, the research part was originally designed as a warm-up exercise, while the real adventure was supposed to take place underground.

Since Josch Zahradnik, after co-author Marko had to quit due to lack of time, does not really enjoy writing alone, Lena Richter and Andreas Gruner joined them.

Warning - some spoilers cannot be avoided in the further course of the text.

On the trail of the giant carp of damnation

First of all, the new team of authors put the concept to the test and revised it. After agreeing to keep the basic idea of ​​the region-threatening evil, we turned to the most important of all questions: what evil should it be? We finally agreed on that Giant Carp of Doom. Well, not really, but the aforementioned “giant carp” was our placeholder term for “the really nasty thing that threatens the country and that the heroes have to track down” for a long time and also a running gag in communication with the publisher. Since what we finally selected should not be revealed in this article, we will continue to speak of the carp of damnation for the sake of simplicity. So please imagine something particularly dangerous and terrifying below this.

After we finally understood the details of the carp and the possible tasks for the heroes, we noticed that the story, as it was beginning to emerge before our eyes, could be set even better in the neighboring region of Lordal than in Hjaldingard itself. Probably only very few Thorwaler players know that there was not only the exodus of the Hjaldinger over the Thalassion to Aventuria, but also a second exodus over the western mountains into the area that today bears the name "Lordal" or "Lorthalion". This region has a lot to offer as an adventure scene: no central power, but grumpy barbarians (and barbarian-biting bears), a natural player guide through the mighty Lor stream, a perfectly suitable giant carp of damnation and a number of exciting localities and legends that fit well into the Let adventure be inserted. An imperial ghost town in ruins. Rune stones. An annual market. Berserk. Ghost seers. Baramuns. And much more.

He who seeks finds 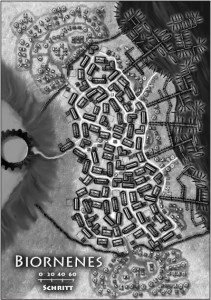 At this point we decided that it would be a shame for the beautiful setting if we only used the research section of the adventure as a preliminary skirmish, as originally intended. Instead, we decided to give the heroes the opportunity to delve deep into the history and mysteries of the country and its people. Various ideas for research sections came to mind, and the search for knowledge across the land and in the legends of the barbarians grew into the largest section of the adventure.

At the same time, we thought about how the problematic “It's unbelievably urgent - but take a trip around the world first!” Effect could be mitigated. Our response to this was two game mechanisms with opposing effects on the game, namely information and escalation. The heroes can collect information at various points and use it usefully in the finale. While they are searching for information, however, the threat increases with each passing day - the country becomes more and more dangerous to travel through, more information is harder to find in the spreading chaos, and even if the threat is ultimately averted, it arises the question of how much could still be saved in view of the advanced escalation. At the same time, if you go unprepared for the giant carp of damnation, it will be much more difficult there and may fail - or at least not achieve the optimal result. The gaming experience of a very research-loving group will thus differ significantly from that of a hasty one, and the opportunities and risks are each different.

In all of this, our aim was to make the adventure as free as possible and to give players as little as possible apart from a central task and various boundary conditions. On the other hand, there should also be a clear red thread as well as opportunities for game masters to give the hero sufficient assistance in the event of impending disorientation. We are confident that we have succeeded in bringing these ideas together under one roof (or horned helmet), and we are curious to see whether you share this impression.

As an explorer in Lordal

Although we as players and game masters appreciate detailed backgrounds, we as authors were very pleased that Lordal, despite all the ideas and suggestions Under the star pillar is still quite thinly described overall. So when we were writing the first Lordal adventure in DSA history, we were able to feel as discoverers and designers of an unknown region at the same time. Something similar is planned for the heroes of the adventure. 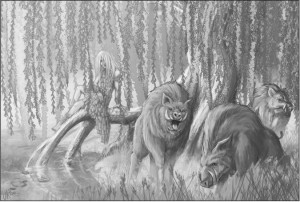 The previous publication density in Lordal (approx. 0 plots per right mile) also means that there are probably only a few groups playing there so far. For groups from outside Lordal, both motivation and a suitable journey are provided in the adventure, which brings them together with two important NPC companions at the same time. Really lordal groups are also not excluded. Because although the adventure also has the character of a journey of discovery, it is definitely a good idea to play it with locals. After all, it is important to uncover those secrets that are hardly known to anyone, even in Lordal. Whether native or foreign, characters are definitely important who can cope with the Lordal culture (i.e. are strong in combat) and who have an interest in the country, in its inhabitants, in its myths and legends, and above all in its future. By the way: The adventure is water-heavy enough that even girders can get their money's worth!

We therefore hope that as many of you as possible - whether lordals or not, with gills or without - will go in search of the giant carp of damnation so that the song of Lor can continue to sound for a long time. We wish you a lot of fun, success and always a sharp ax on your belt.