Around 400 BC. the torsion technique was invented during the preparations for the war between the elder Dionysius of Syracuse and Carthage. The tension that arises when the tendon bundles are twisted was used. Of course, these guns were not invented suddenly, but there were some precursors who already used this technique.

The first step towards the gun was the further development of the hand bow. In order to achieve greater ranges and to shoot larger calibers, bows were made out of metal, which, however, could no longer be stretched by one man by hand alone.

The resulting weapon was called gastraphetes (Greek belly gun). It was a composite bow attached to a stick. The tension of the bow could no longer be done by hand, so that one aimed the weapon at the ground and braced against it with the stomach. To make this possible, the stick had a corresponding device at the rear end. Due to its weight, the weapon was too bulky to be fired by a person standing. It is therefore likely to have been placed on entrenchments or on its own supports (cf. the supports for the first muskets in the 17th century). If you wanted to fire, you only had to move a small lever.

This very exhausting device was soon improved. A construction with a rack was invented, which made it possible to stretch the bow by rotating it. Now the caliber and the arch span could be increased again and it was placed on a substructure (on the appearance of which the scientists, incidentally, do not agree at all). The polio orcetician Biton handed down spans of up to 2.8 m. These arrow guns were not very effective in the field and therefore rang around 350 BC. the invention of the torsion gun. Fortifications remained one area of ​​application and it appears that fortress towers were also built in Greece for the use of arrow guns.

From the point of view of the Poliorketiker, two types of torsion artillery can be distinguished: catapulta (grch. eythytonon; Flat fire gun, especially for arrows and bolts and therefore gladly scorpio (Called Scorpio) and ballista (grch. palintonon; Cable cannon, for arrows, stones and pottery). Although both systems were designed on the same principles, there were significant differences. Arrow guns had one plinthion (Frame), two projectiles. Other main ingredients were also different. Arrow guns had one syrinx (Whistle), throwing guns one climax (Ladder). The former rested on a tripod with a knob at the top, the latter stood on two stands with thresholds, struts and bolts. The larger the caliber, the more firmly these stands were connected to one another in the case of projectiles.

All machines consisted of a wooden frame with a pair of twisted tendon strands attached to each corner by means of a tendon tensioner in a tensioning box. A bow arm protruded from each strand and was connected to the holding device for the projectile by means of a rope. Heron developed a formula according to which the size of the individual gun parts could be manufactured in relation to the diameter of the tendon tensioners.

In the case of projectiles, the caliber was calculated using a formula based on the weight in mines. It read: 1.1 x cube root from 100 ball weights. Calculation example: Caliber for a 10-lead bullet (= 4.4 kg): 1.1 x cube root of (100 x 10) results in 11 finger widths = 21.2 cm. The caliber of the arrows was generally the ninth part of the arrow length. From all these numbers and the diameter of the tendon tensioners (usually the only archaeologically detectable remains of guns), the size of the guns can still be calculated today. Based on these findings, the most popular calibers and weights of stone throwers can be determined: 10, 15, 20, 25 and 30 mines. In the case of large weights, there was an accumulation of 60 mines. In addition to arrows, bolts and stones, beams and pottery were also used. The latter could be filled with pitch, pebbles or other litter. Incendiary devices could also be used with it.

It took a while for the torsion guns to spread in the Greek heartland. In Athens they were first used in 355 BC. mentioned as inventory and compulsory exercises have existed since approx. 330 BC. After that they grew rapidly and the construction was perfected in the Diadoch Wars.

Around 280 BC. torsion gun construction achieved a surprising level of standardization. The metal-clad gun construction made of wood remained almost the same for large guns throughout ancient times. Philo of Byzantium dealt intensively with the construction of guns and was actively supported by the Ptolemies in Alexandria. Later, Ktesibios perfected the knowledge, so that the authors of the Roman Empire liked to refer to these two polio-orceticists.

The first torsion guns only fired arrows. It was not until the time of Alexander the Great that they were further developed into stone throwers and were used in sieges. This could be used to throw smaller stones behind the walls. Already 30 years later Demetrios was able to use Poliorketes caliber of 3 talents (= 78 kg). Around the year 100 AD. the rock-throwing torsion guns of Tacitus were mentioned for the last time in literature. In a subordinate role and with slight changes (bow arms inside instead of outside!), However, they seem at least until the 3rd century AD. have been in use, because there are Roman finds from this time in front of the desert fortress Hatra. 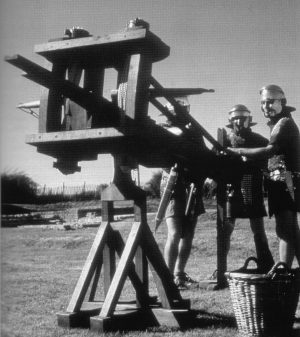 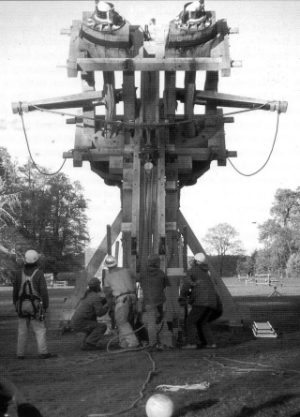 The use of torsion guns in battle remained behind the performance (far better than archers and javelin throwers). Guns mostly had to be dismantled and transported. The tendons wore out quickly and since repairs were dangerous during a battle, ready-made reserve frames were used in the sense of a modular system. Torsion guns, on the other hand, were increasingly used during sieges, both by attackers and defenders. The latter could easily keep the guns in good condition behind the entrenchments.

In Hellenistic times only the best material was used for the neyra or nervii (Tendons; mostly animal tendons, but also women's and horsehair, as well as silk; no pig tendons), which allowed the best possible range. The Romans initially had to import these tendons from Greece. However, torsion guns quickly began to be mass-produced industrially. This noticeably decreased the quality of the individual pieces. However, this fact was more than offset by the now possible mass use (see rifle - machine gun). In a pinch one could make do with tightening the tendon tensioners. 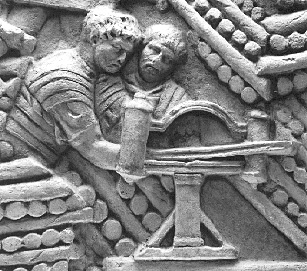 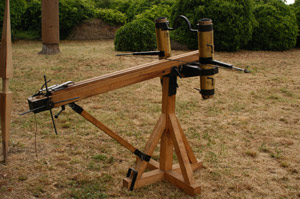 Around the year 100 AD. There was another improvement in the gun construction, especially for the small mobile units. The metal-studded rectangular wooden construction on the front was now made in pure iron construction and from now on also as a ballista referred to (although it is still catapultae were). Who was the originator of this innovation can no longer be traced. The often rumored pseudo-Heron from Alexandria of the Neronian period is out of the question, although he writes about a hand gun (Greek. cheiroballistra, lat. manuballista) had written. According to his information, however, this was only 1 m long.

Such small "real hand guns" were not built for mass use in antiquity. These forerunners of the crossbow were either used by snipers or were used in police operations where it was important to fire a shot quickly (e.g. at refugees during recruiting campaigns in late antiquity). Incidentally, the medieval crossbow remained until the 16th century AD. also superior to firearms in distance and penetration. 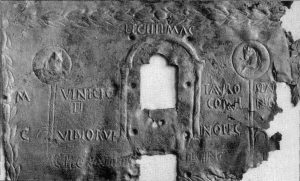 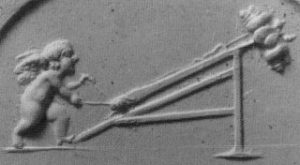 There weren't just two-armed torsion guns. The onager (grch. monagkon; Wild ass) was a one-armed version for medium and larger calibers, which was already used by the Greeks. The tendon strand was horizontal and there was a single massive limb with a throwing loop attached to it. In the rest position, the angle of inclination was 60 °, and when tensioned it was approx. 30 °. In order to cushion the limb, the construction required strong upholstery at the front (sacks filled with sawdust, reinforced with strong ropes and attached to a solid block). The onager is the only large-caliber torsion gun that was noticeably widespread in late antiquity.

Artillery was already used in some places in the Roman army during the times of the militia army. With the replacement of the manipular tactics by the cohort tactics, the field artillery finally achieved its breakthrough. In contrast to their opponents in the Hellenistic East, the Romans did not train their own artillery troops, but included them in the infantry. The exact number of guns per legion is unknown. Presumably under Augustus each centurion got one scorpio assigned (possibly also a ballista). During the 1st century AD came mounted on wagons carroballistae for the defensive battle (e.g. on camp walls). In Trajan's day, every cohort had a heavy torsion gun and every centurion had the aforementioned carroballista.

In the 4th century AD Vegetius wrote to a legion (no more than 6000 men!) 55 corroballistae and 10 onageri to. During this time, these war machines were also used very frequently in field battles. A carroballista was pulled by donkeys, a onager of oxen. The meanings of ballista and catapult, however, had been reversed. The other projectiles seem to have stopped being used in late antiquity.

The Poliorketics also developed several other guns than those already mentioned. Obviously they did not come into practical use, since Philo of Alexandria compared them all to those actually used. Philon himself developed the arrow gun taut with a wedge; Ktesibios that aerotonon (Air gun) and chalcotonic (Ore cocked gun; perhaps with a metal spring as a throwing drive) and Dionysius of Alexandria that catapeltes polybolos (Multi-loader gun). How they looked, how they actually worked and whether they were ever actually used is unknown.

In addition to the damage caused, the moral component must not be disregarded. Guns proved to be particularly valuable when used against the barbarian tribes from the north. Even disciplined troops sometimes struggled to maintain formation with unrequited fire from a distance. The firing of a torsion gun also causes a characteristic noise that is even more demoralizing when used on a large scale. With the disappearance of this field artillery in the early Middle Ages, there was no comparable type of weapon with a similar effect until the mass production of rifles.