Why should people think furries are bad 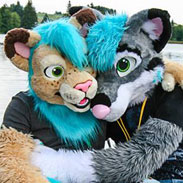 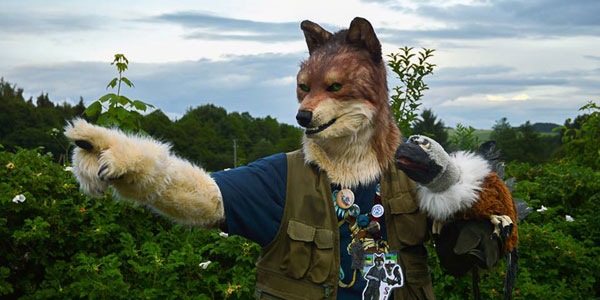 The most popular types of fursons, the animal alter egos of the furries, are dog- or feline-like predators. Photo: © Sid | www.cesfur.org
There is truly no shortage of diverse subcultures in modern society. In addition to the already established hipsters, punks or hip-hoppers and so on, there are also communities that, for quite understandable reasons, are still largely unknown in society. One example are the so-called furries. This is what fans of anthropomorphic animal figures call themselves - animals with human characteristics or people who dress up as animals.

The creation of the furry fandom dates back to the 1970s in the United States. This movement experienced its greatest boom at the turn of the millennium. At that time, the community began to spread all over the world - including the Czech Republic. But it wasn't just about being regular Lion King or Around the world with Willy Fog to look at or to expand his colorful cuddly toy collection. More and more conventions (the so-called cons) took place, regular events at which the members of the community could meet to devote themselves to their favorite activities and thus consolidate their culture. The number of participants grew steadily. Fans came either because they liked the furry art, because they were looking for like-minded people, or just to escape reality. In the Czech Republic and Slovakia, such events include ČeSFur, Zodiacon, MiniFurr or SnowFur, which takes place in winter.

Fursons - the animal alter egos of the furries

Furries, as they call themselves, each have their animal alter egos, the so-called Fursons. They have the shape of an animal that is particularly close to the wearer and at the same time takes on certain of its properties. Since these figures do not exist in reality, the Furries can design them according to their own ideas. If a furry is shy in everyday life, he can act as his alter ego under the name Zrzek (for example: redhead) more courageous and self-confident. With the help of his alter ego, he then communicates with the other furries on the Internet and / or on the cons. They address each other with their animal names and behave as is typical for the respective animal. The most popular types of fursons are dog- or cat-like predators. As far as the species are concerned, however, there are no restrictions. Mystical figures such as dragons and griffins are also popular. But it is also not forbidden for anyone to appear as carp or spider.

The Fursons are what distinguishes the Furries from Larps or other role-players, because many Furries not only pretend to be this fictional character, but see them as part of their personality. The long-time member and organizer of Czech furry cons, nicknamed Altair, describes his furson as follows: “My furson is an anthropomorphic Friesian horse. I see it as my projection in cyberspace. I try to use it for all communication on the Internet with exceptions. For example, I greet someone with a shout, or if someone writes something like, 'Hey, are you there?' I reply to them on an IRC with an action that looks something like this: '* Altair turns his left ear in your direction '. Because that's what a horse would normally do when it hears an interesting noise. "

It's all about tolerance and making friends

Because the Furries have a close relationship with their animal self, art and other creative activities are also very popular within the community. Because that is the only way they can give shape to their alter egos in the material world. "If your second self is a dragon with a beautiful background, how else do you want to show it to the world than have a portrait painted of him?" Asks Martin, a former active member of the community, and shows me the portraits of his fursons: a blue wolf. The being in the hand-painted picture shares some traits in common with the real self, such as facial expression and clothing style. “Furries have a lot of respect for people who can draw and design costumes, even if this doesn't necessarily correspond to the real abilities of the artist. Even an average artist can become a star in the furry community if they are willing to draw on a given subject, ”Altair adds. The artistic work of the Furries is so varied that special sub-genres gradually developed. One genre that has become ingloriously popular is drawn furry pornography. This is summarized under the term “yiff”, supposedly derived from the sound that arctic foxes emit when mating. 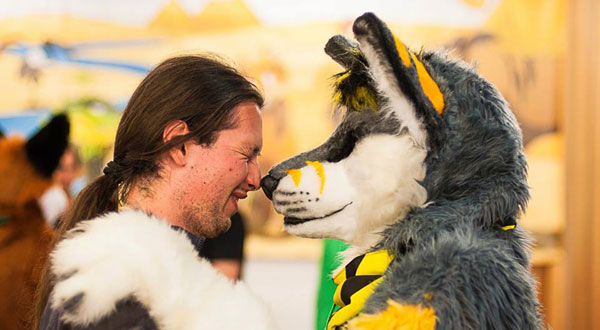 The emphasis on mutual closeness also results in the occasional attribution of a certain sexual serenity and openness in furry communities. Photo: © Karakina Fox | www.cesfur.org

Among the furries, the costumes Altair speaks of are Fursuits. Often the first thing to impress the uninitiated because of their extravagance, although only worn by a minority of the furry community. At the ČeSFuR-Con last year, just a third of the 200 participants were dressed in fursuits. These costumes are another way the furries can envision their alter egos. And although wolves, lions, dragons or other animals that are dangerous in nature are represented among them, the costumes never seem scary, but rather infantile and happy. This is also because the community is primarily about tolerance and making new friendships. The emphasis on mutual closeness also causes the occasional attribution of a certain sexual serenity and openness in furry communities - more than half of American furries profess bisexuality.

Is there a furry in each of us?

Despite all their distinctive appearances, the identity of the furries remains hidden from the view of a normal observer. In everyday life, furries do not differ in their behavior or appearance from the majority of the population and do not give their inner tiger or fox any space. They do not wear fursuits on the street, use their animal names, bark or neigh in public. “They are completely normal people. Often they work in the IT industry or just young people who work in the office. Some of them might wear a t-shirt with a wolf howling at the moon or with painted animals, but even in this they hardly differ from others nowadays, "comments Martin on the Furry identity. However, furries also have a positive relationship with animals and nature in everyday life, which for some also takes the form of activism. “There are furries who are really very interested in nature and 'their' animals and who are committed to protecting the environment in a wide variety of ways. For example, I know 'wolves' who are involved in a wolf observation project run by the environmental protection organization DUHA. They are exploring the occurrence of predators in our latitudes and are concerned with protecting them, ”says Altair.

Furries are a subculture that is only visible on certain occasions - at regular events, but above all on the Internet and in cyberspace. They present their works, play online role-playing games and meet at the Cons a few times a year. There you can grill, sing karaoke and do sports. Art and fursuit fashion shows and dance competitions are also held. In contrast to the furry communities in the west, which are more active in the urban environment and hold their cons in halls, the furries in the Czech Republic and Slovakia have a closer relationship with nature. Here the Cons take place in rural accommodations, near forests and mountains, for example on the Bohemian-Moravian Highlands or in the low mountain range of the so-called Bohemian Paradise (Český ráj). “That's actually pretty interesting. You could say that the furries here with their direct contact with nature are much closer to the 'animal' idea than, for example, in the USA, where they have a much larger membership base, "says Martin, describing the peculiarities of the Czech furry community. and always kept his eyes on his plush husky.

The thoughts and interests of the furries may seem obscure or wacky to many, but the question arises whether there is something behind all the fursuits, tiger portraits and animal alter egos that has been close to mankind for thousands of years. The interest in anthropomorphic animal forms and their projection in art and personality is as old as civilization itself - as evidenced by the cultures of the ancient Egyptians, Indians and Aztecs. Isn't there a bit of furry in each of us?

Links on the subject