Street art in Palestine Is Banksy's Art on the Border Wall a Fail?

With his stencils, Banksy attracts many tourists to the border area between Israel and Palestine. Actually he wants to draw attention to the lousy situation of the people. Will that work? Many people in Bethlehem are not sure. 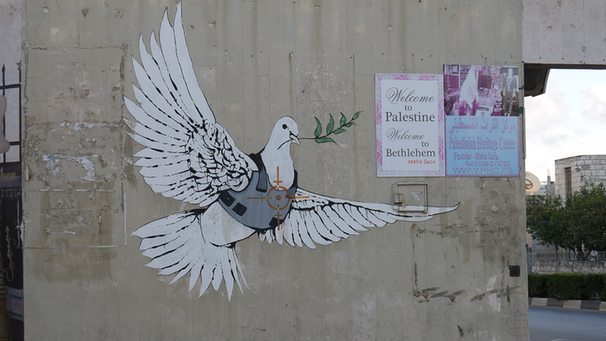 Moodi is a street art tour guide in Bethlehem. He shows the tourists the many stencils and graffiti on the huge, gray wall. The wall that divides Israel and Palestine. Portraits of freedom fighters or writings like "Freedom for Palestine" - this art is clearly political. It comes from activists in the area, but also from international stars like Banksy. 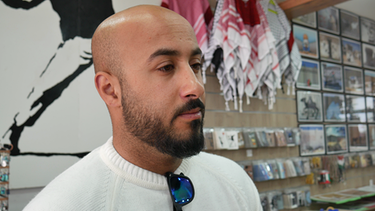 An activist who throws a bouquet of flowers instead of stones or a dove of peace wearing a bulletproof vest: the artist has immortalized himself on concrete several times over the past ten years. There is a real hype about street art in Bethlehem. Allegedly, more people now come because of Banksy than because of Jesus' birth grotto. The Palestinian Moodi - who is a sprayer himself - thinks the many visitors are great. Not only because he deserves:

"We're spreading our message in a peaceful way. We want to show people how we feel. There are so many problems about the occupation. We can't change that, but at least that's how we can get a message across. People can here come here, look at the graffiti - and then you will understand very well what this is about. "

But whether the tourists really understand the conflict better through the spray art? Not everyone is as optimistic as Moodi. The problem: The graffiti tourists he shows around take their pictures of the wall - and then usually jet off again. They get very little of the living conditions of the residents. Not even from the story of how the wall came into being. But that is exactly what the residents want: That this wall is not simply accepted as normal. Art tends to play down or even gloss over it, some criticize. In the worst case, it would only be remembered as an art object. 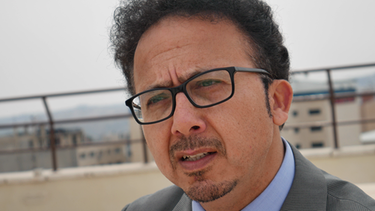 Jamil Khader is Professor of English and Dean of Studies at Bethlehem University. He deals scientifically with Banksy's works.

"Banksy allegedly told himself how one day he was painting the wall and an old Palestinian came by and asked: What are you doing there? Banksy said: I'm painting on the wall. Whereupon the old man looked at him and said: Don't do that. The wall is ugly. Don't make it beautiful. Go home. "

With his new hotel, he also makes it clear to Banksy that it's not just about beautiful pictures. It's right on the wall and advertises the worst view in the world. A permanent exhibition on the ground floor shows the history of Palestine and the suffering of the population. Backpacker and hotel guest Matthew from Canada believes the exhibition can reach tourists who would otherwise not be so interested in the situation in Palestine. Nonetheless, visitors should also go outside and make their own experiences, he says:

"This location is great. But you don't get what Palestine really is when you're in here. I think that's also the danger. I've been to museums in Israel, been on tours in Palestine, and museums in Palestine." I have spoken to people in Palestine and to people in Israel. I think it is very important to listen to as many different points of view as possible and then form your own independent opinion. "

Tour guide Moodi thinks that it is up to each visitor: whether they are only interested in art - or also in the country, people and history:

"When people come here and want to hear stories about life here, we tell them. If they want to see graffiti, we show them graffiti. And if someone wants to go on a political tour, they get it. It all depends from yourself. "