For divers and submarines: Communicate underwater with a flashlight

In the future, it will be possible to communicate better under water with light-emitting diodes. California researchers have developed an LED that clocks 76 times faster than previous ones. This means that even large amounts of data can be exchanged. 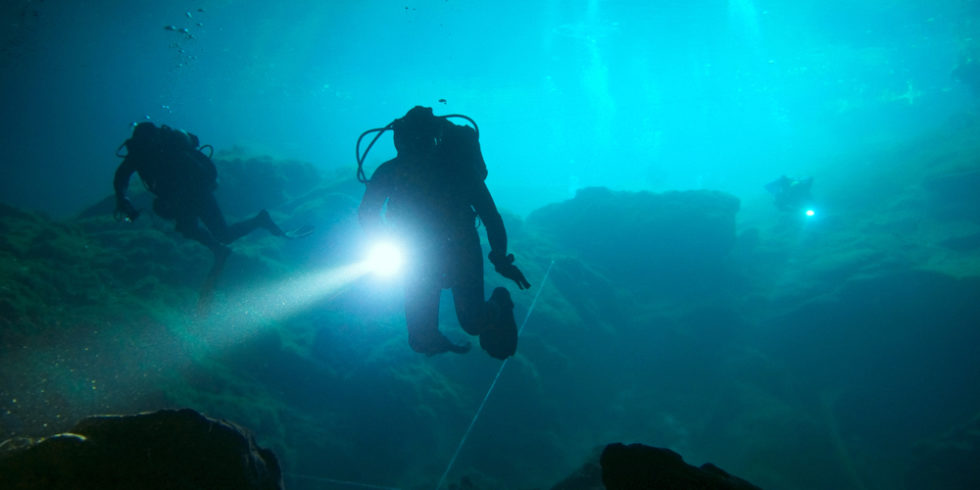 With a new optical communication system, divers as well as submarines should be able to communicate better.

In the future, divers will be able to communicate well with each other and with their mother boat. This also applies to submarine captains who have something to say to their fleet. Even when it comes to exchanging large amounts of data, the new communication system does not fail, at least not if the water is not too cloudy and the distance does not exceed a few 100 meters.

This is possible with a technology that is already used between aircraft, spaceships and ground stations: with optical transmission technology. This already works today, but the data transfer rate is low.

The flashing intervals of the light-emitting diodes, which transmit voice and data by means of a pulsed flashlight, are too short. The reason for this is that blue and green glowing laser diodes have to be used because this light color is the least absorbed by water. However, these can only be clocked at a low rate.

A team of researchers from the University of San Diego in southern California has now developed a light-emitting diode that can be clocked 76 times faster than those used today. In addition, it shines 80 times brighter, so that the range increases, at least in theory, because the emitted color of yellow-green is not ideal for bridging long distances under water.

The scientists' next goal is to change the color of the nippy diode towards blue-green. Anyone who wants to communicate optically wears a transmitter and receiver unit. It consists of a transmitter diode and a sensor that receives the signals, and a converter that converts electrical signals into optical signals and vice versa.

The amounts of data that are transmitted are so large that they cannot be handled acoustically at all. In order to get them to the surface of the water, the vehicle has to hang on a data umbilical cord, which restricts movement. Alternatively, the data could be saved on board and read out only after surfacing. However, the information from the ocean floor is much more meaningful when transmitted in real time. In addition, the vehicle could be controlled in a more targeted manner.