What is business consulting

Consulting is the individual processing of business problems through interaction between external, independent persons or consulting organizations and a client seeking advice.

In a broader sense, the consulting services provided within an organization (in-house consulting or internal consulting) also count as consulting, as is consulting that is provided as an ancillary service in business transactions. The term consulting is also used for technical issues, e.g. in engineering consulting.

In the western industrialized countries, consulting is a service that has been facing increasing acceptance and use for several decades. According to forecasts, the saturation of the consulting market is not yet foreseeable despite the recent decline in demand. However, the consultancy landscape will continue to differentiate and the boundaries to neighboring services such as outsourcing will become blurred. At the same time, the trend towards acquisitions and mergers has also hit the consulting industry. Consulting elements that used to be separate, such as organizational and IT consulting, continue to grow together. There is also a great need for advice in the former state-trading countries and developing countries, but this is not always expressed in monetary demand due to the economic difficulties and an underdeveloped understanding of the value-added potential of consulting. Overall, a particularly high degree of internationalization is forecast for the consulting industry.

Consciously or unconsciously, every problem solution is based on a consulting concept, a comprehensive, conceptual draft that contains the philosophy, the range of services and the consulting strategy of the consultant or the consulting organization (see figure "Consulting - frame of reference"). 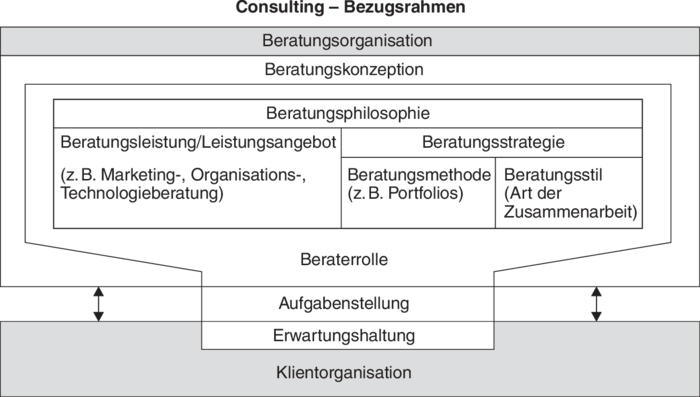 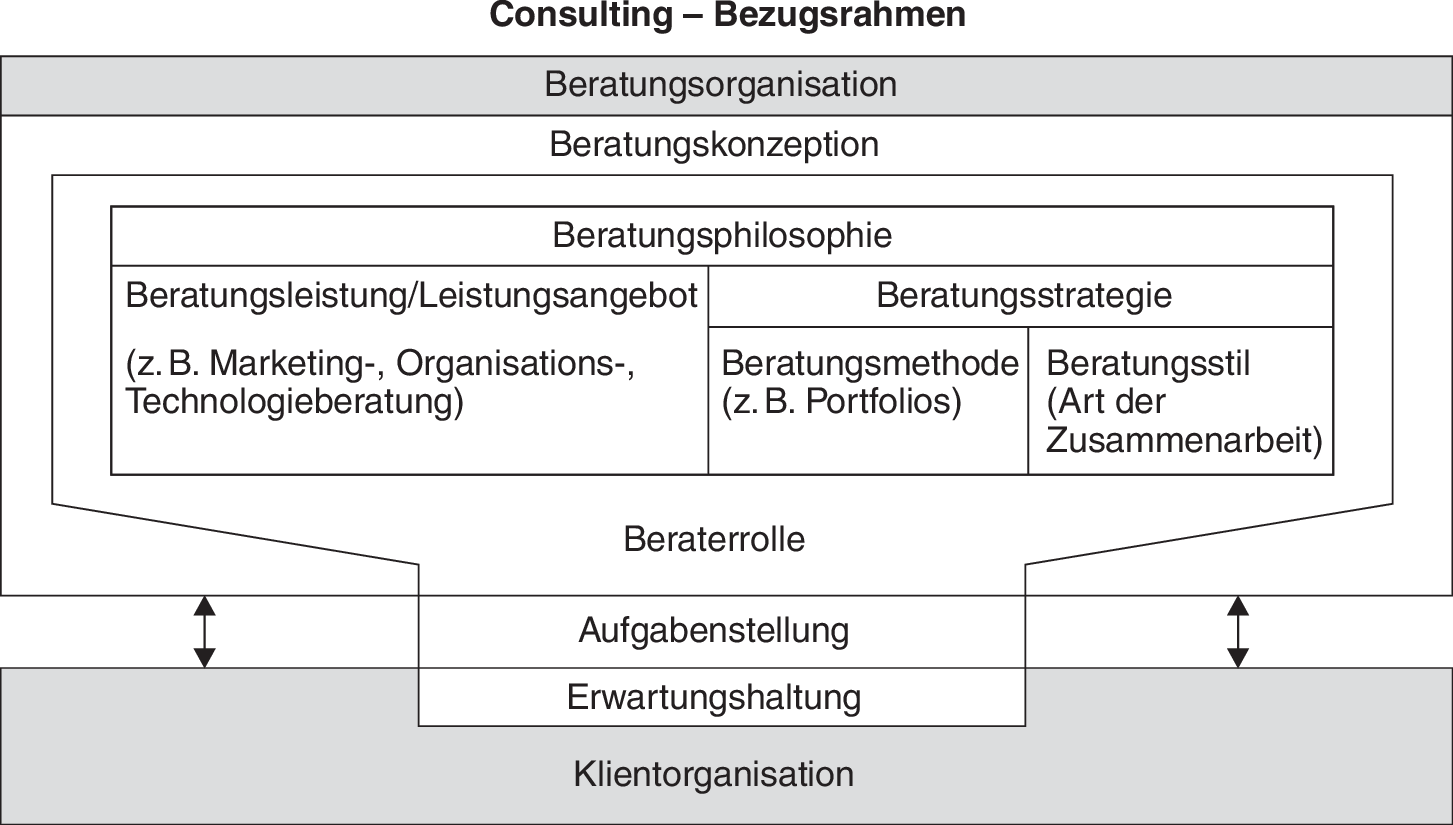 The consulting concept is finally adapted to the task and the expectations of the client.

The Consulting philosophy includes the general objectives of the consultant as well as his value and behavioral patterns. A typical element here is often the avoidance of relationships of dependency on the client in order to maintain consultant neutrality.

The Range of services The consultant can be characterized according to the business functions covered by his offer as well as the degree of specialization of the services with regard to the size of the client organization, the industry and the region. Large, internationally active consulting companies usually try to position themselves as multifunctional specialists, while smaller consulting companies and individual consultants are usually characterized by a high degree of specialization.

The Advisory strategy is a synthesis of counseling method and counseling style.

- The Advisory style is essentially expressed in communication in the consultant-client dialogue. In the case of a mechanistically oriented approach in accordance with the “purchasing model” of consulting, communication tends to be one-sided towards selling largely standardized solutions. Following the “doctor-patient model” of the consultation, after the needs-based diagnosis of the usually superior consultant, a “medicine” is prescribed based on technical and functional aspects, with which the client is then left alone. In the process-oriented approach of organizational development, there is a regular and participatory interaction between consultant and client, which is based on a holistic view of the organization (E. Schein).

- The quantitative or qualitative instruments used characterize the Counseling method. Many methods that are now common knowledge in business administration have been developed or further developed by consultants (e.g. portfolio analysis, overhead cost analysis).

The existing problem in the client organization and the expectations of the client towards the consultant, but also the consultant's consulting philosophy, shape the Role of advisor during his mission. On the basis of different characteristics of the degree of influence or the level of involvement of the consultant and client in the problem-solving process, a continuum can be constructed on which the different consultant roles can be clarified (A. Wohlgemuth).

- As Crisis manager the consultant is granted far-reaching decision-making powers by the client. The consultant's influence is dominant for the duration of his assignment.

- The Interventionist, who intervenes in the organizational process in coordination with the client is a consultant role in which there is more or less an equal distribution of the degree of influence between the two groups.

- The neutral third parties represents the opposite pole to the crisis manager on the continuum of advisory roles. The adviser tries to intervene in the sense of helping people to help themselves by designing the problem-solving process. However, it has little influence on decisions.

In many counseling cases, a mix of different service offers, strategy elements and advisory roles will be necessary, tailored to the respective advisory situation. A pure technical advice, as well as a consulting related exclusively to the design of the change process, will be the exception. The combination of these two forms of counseling in the sense of one integrative advice is suitable for many applications.

Regardless of the specific design in each case, a process is run through for each consultation. This process is modeled in the figure “Consulting phase model of the consulting process”. 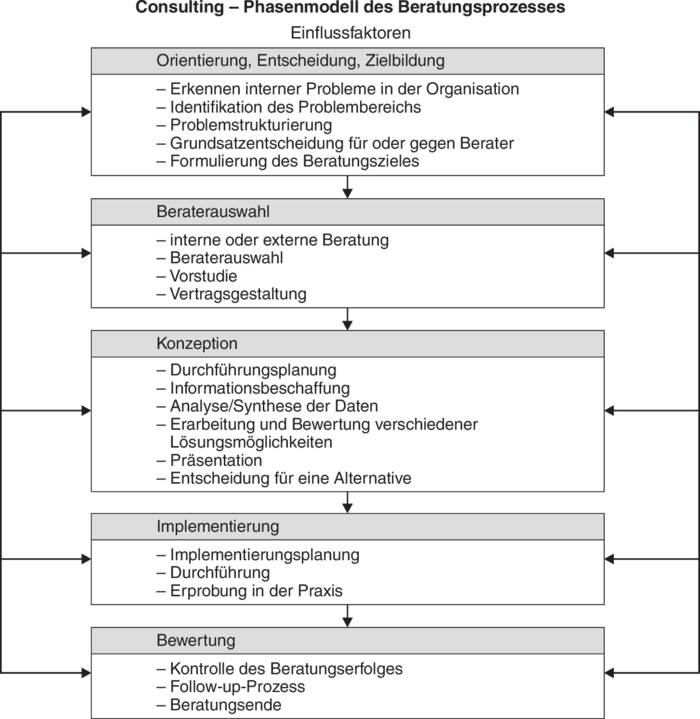 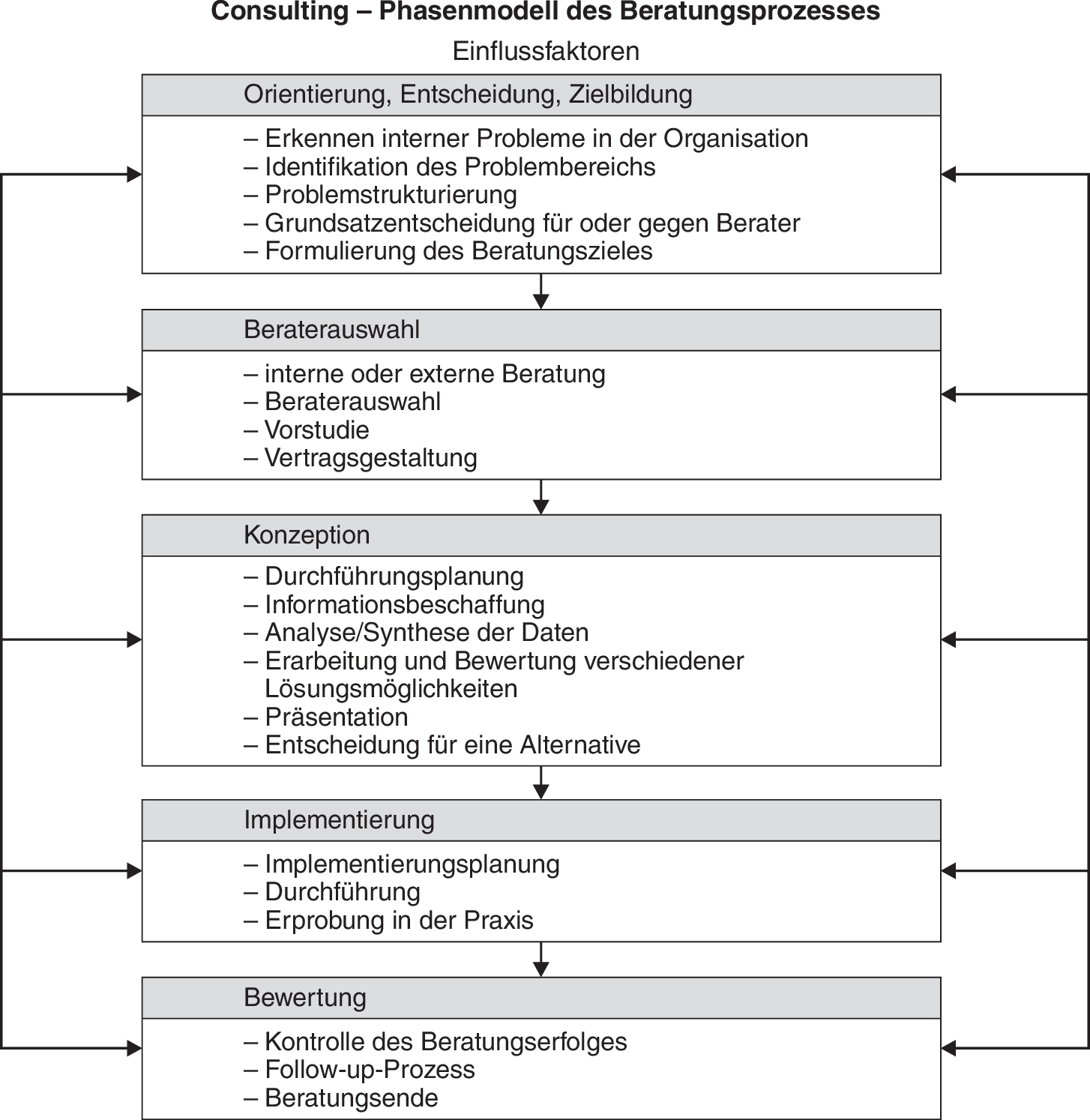 The ideal-typical process shown is not inevitable, but in practice is characterized by changes in the sequence and overlapping of individual phases as well as feedback effects.

The organization of consulting firms is generally characterized by a flexible structure and flat hierarchies out.

The organization of the consulting company is strategy-dependent. In consulting companies that follow the one-firm strategy, business activities are expanded exclusively through the independent development and expansion of their companies. Many large, internationally active consulting firms are pursuing this strategy. The aim is to achieve an internationally uniform organizational culture, and the corporate principles are to remain unaffected by other companies.