The problem of defining prime numbers is only possible through a multiplication model,

not to be solved by the prevailing model of division.

1.      That 1 The reason for this is simple: like any other prime, it consists of only one Factor. This fact takes precedence over all other considerations. With that one could already address the topic "Is 1 a prime number or not?" end, not all the world of 1 would deny its prime number property.

The mathematician, physicist and children's author Chris Ferrie provides a curious example of this with the book

"The number 1 is not a prime number. The book should be reprinted."

"How could an alleged math book contain such a mistake? I am appalled."

In the opinion of these angry people, what had Ferrie done wrong? In his definition he failed to insert "greater than 1" because his definition included 1 as a prime number: 1 is divisible by 1 and itself. The expected definition should have been something like this:

A prime number is a number greater than 1 that is divisible only by 1 and itself.

Ferrie says: "The reason why 1 is not a prime number is that the prime number definition itself is contorted in order to exclude the 1. He also mentions the reason for this falsifying definition: Convenience (CONVENIENCE) in order to avoid other rules not having to cite the exception 1. In fact, 1 was listed in prime numbers until the middle of the last century.

Mathematicians are obviously too little aware that a judgment of expediency among themselves and for everyone else ultimately turns into an unjustified claim to truth.

2.       The path to expediency was obviously two-step. The first consisted in believing in all seriousness, and in some cases still believing, that the 1 could only be used once, which is why one could in no way say that the number 1 is divisible by itself and by 1. This absurd postulate turned out to be untenable, which is what the critics of Ferri's first definition confirm. However, since it had once been decided to exclude the 1 as a prime number, the addition "greater than 1" was added in a second step in order not to have to change the existing regulations: 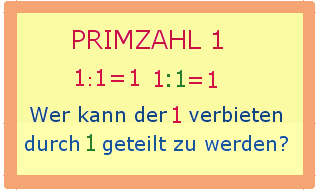 3.       Without long argumentation, it can be stated simply and simply: The current definition of division is a mistaken approach, without logical soundness. For the correct way of thinking, the numbers are to be seen in their organic context from the number 1 on. After the first three numbers you get to the first composite number 4 = 2 * 2. Two times two requires 1 * 2 or 2 * 1. Every prime number, but also every composite number, means the beginning of an ORDER, which can be represented as 1 * Z or Z * 1: This form of multiplication also applies to the number 1 itself, i.e. 1 * 1, followed by 1 * 2 or 2 * 1. In the first case, 1 is MULTIPLIER for all subsequent numbers; in the second MULPTIPLIKAND, primarily for units of measure.

In the table below, the second row consists of the reverse form, which is necessary, for example, because of 3 * 2 and 2 * 3 after the previous 2 * 2 and 1 * 3. The following multiplications with inversions can be formed for the numbers 1-9:

The validity of this representation is confirmed in the two-digit composition.

4.      A redefinition of the prime number must be preceded by the definition of the composite number, each of which occupies a certain position within a sequence starting from 1. Since 1 does not change the multiplied number, this first definition requires the addition "greater than 1": 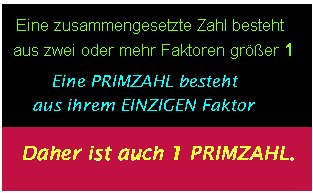 5.      What should I do? The mathematicians have to give up the apparent expediency of an untruthful CONVENTION, give preference to TRUTH, recognize the 1 as a prime number again, and let lists of prime numbers start again with 1.

The definition of the English Wikipedia entry already deviates from previous standard definitions and is also indirectly based on composite numbers:

The expediency clause "greater than 1" is clearly justified as follows:

If the definition of a prime number were changed to call 1 a prime, many statements involving prime numbers would need to be reworded in a more awkward way.

If the prime number definition included the number 1, many rules regarding prime numbers would have to be reformulated in a more laborious way.