How is halite used in everyday life

properties
Occurrence and importance in the human body

Sodium chloride is a common substance in nature. Sea water contains up to three percent. The rock salt in the deposits is known to mineralogists as halite. In total, there are around 200 grams of sodium chloride in each human body. Table salt is one of the essential minerals, humans have to consume two to five grams per day. The sodium ions enable the conduction of excitation in the nerve cells, the chloride ions are involved in the build-up of gastric acid, which consists of 0.3 percent hydrochloric acid.

Pure sodium chloride forms colorless crystals that appear white when ground or as a crystalline powder. The sodium salt of hydrochloric acid has the typical salty taste and is used together with additives such as potassium iodate or sodium iodate as "table salt" or "table salt" in many foods for seasoning. The salt is hardly hygroscopic and can be easily stored in the air. Below 0.15 ° C a dihydrate NaCl • 2 H forms2O. 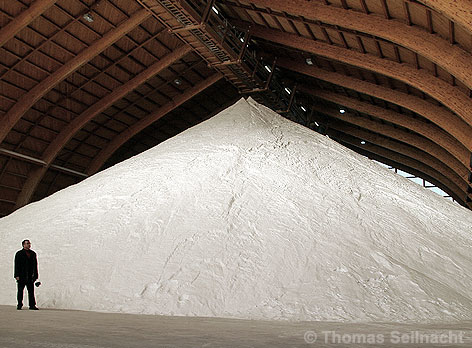 Salt storage in a salt works.
Sodium chloride lowers the melting point of water when mixed with it. Its use as road salt and in cold mixes is based on this property. Sodium chloride is readily soluble in water, but less soluble in ethanol and acetone. The water solubility increases only slightly when heated compared to other salts such as potassium nitrate:

In the case of naturally occurring rock salt, the cube shape is preferred to the octahedron shape. When the concentrated sodium chloride solution quickly crystallizes out on the microscope slide, you can observe both the cubes and octahedra under the microscope: 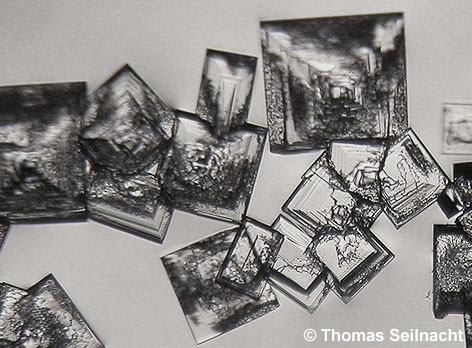 Sodium chloride crystals under the microscope.

Sodium chloride crystallizes according to the cubic system. In contrast to cesium chloride, the crystals are after the Sodium chloride structure built up: Every Na is in the ion lattice+-Ion of six Cl−-Ions surround and vice versa as well. 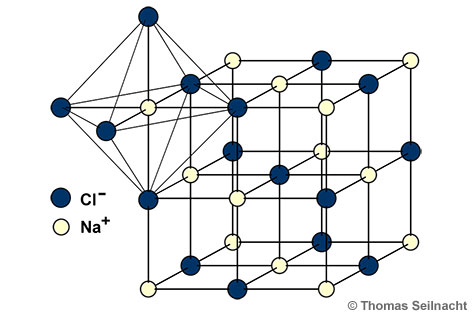 Sodium chloride structure.
Pure, crystalline sodium chloride does not conduct electricity. The aqueous solution and the melt, on the other hand, conduct the electrical current very well because ions are present.

Manufacturing
Often the salt is deposited in underground rock salt deposits formed from former seas. In the past it was difficult to get to the salt stores, today they are mined industrially.

Four different methods of extraction are used in the chemical industry:

1.) During the extraction of evaporated salt, underground rock salt layers are leached with water. The pure salt is obtained by evaporating the brine obtained.
2.) Rock salt is mined in mines.
3.) In salt pans, seawater is allowed to evaporate and this is how the dried salt is obtained.
4.) Sodium chloride is a by-product of seawater desalination. 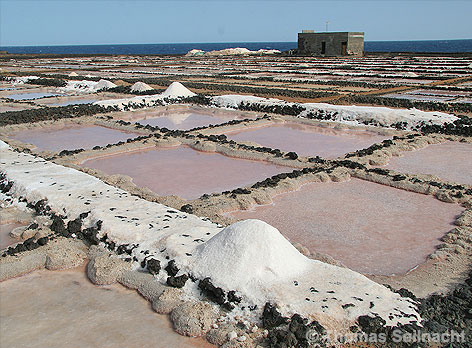 In this saltworks on Lanzarote, the sea water evaporates, the salt remains.
Sodium chloride can be produced in the laboratory by reacting sodium with chlorine. This process is too expensive for industrial production. The reaction produces a white substance that can be identified as sodium chloride with the help of silver nitrate and the flame test.

use
Along with acetic acid, table salt is the oldest means of preserving food. Already in ancient times the Sumerians and Babylonians knew salt meat and salt fish as an article of trade. In the 14th century, the "white gold" was traded at high prices, it was at times as expensive as gold. It only became affordable for poorer people with the discovery of large salt deposits in central and southern Germany.

Apart from a small plant in Bex, Switzerland used to have no salt supply of its own. In the 18th century, Bad Reichenhall was still supplying almost all of eastern and central Switzerland with salt. The first drilling attempts in north-western Switzerland took place in 1836 near Muttenz in Schweizerhalle. Just one year later, the first salt works on the Rhine near Basel went into operation.

Table salt is nowadays added to food not only as a condiment, but also for preservation. The salt binds water in the food and thus deprives the bacteria and mold of their nutritional basis. Many types of cheese, meat or fish are mixed with salt or immersed in a salt bath before they are further processed. 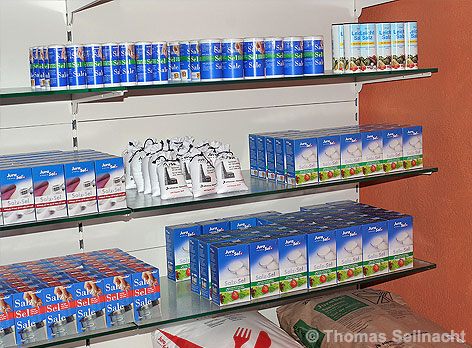 Due to the property of table salt to lower the melting point of water, it can be used as road salt in winter. The use of road salt is problematic. It pollutes the streams and rivers and damages the trees that are planted next to the roads. The rusting process on car bodies is accelerated by the road salt. In the chemical industry, sodium chloride is an important raw material for the production of hydrochloric acid, soda, chlorine and caustic soda. It is also required by the soap and dye industries. 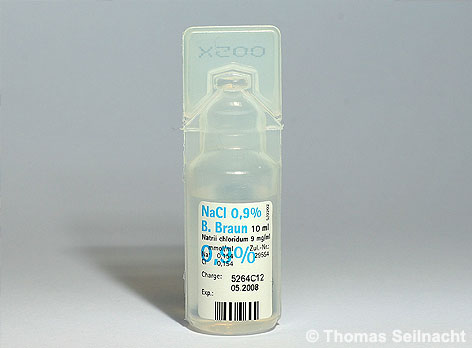 Physiological 0.9% saline solution.
The human body constantly needs the salt through food, as it is constantly excreted through urine, sweat and tear fluid. The average Central European consumes about five grams of salt per day, in warmer countries the salt consumption is much higher due to the higher sweat production.